Steve Perry vs. The Madagascar Mummy

Steve Perry looked in admiration at his newly finished deck. He had spent months working on it under the summer sun while knocking back icy cold tallboys. His skin was now golden brown, with the first hints of melanoma forming on the nape of his neck. Yes, life was good for Steve Perry. He had everything: a rocking music career, a brand new deck, a baby elephant imported from India, and melanoma. Steve Perry was living the American dream -- that was, until the Madagascar Mummy started terrorizing the Africa coastline.

You see, Steve Perry was not only an all-star rocker, philanthropist, and dashing heartthrob, he was vital to the natural order of things on this planet. If a great evil rose from some dark place in the world, it was Steve Perry's job to destroy it. On the other hand, if things in the world were going too well, he would create horrible diseases or kidnap small children and sell them to a Nike factory. The neutrality of the cosmic balance is vital for Steve Perry to keep his powers of vocal majesty, and as such he is driven to keep a watchful eye on all events going on in the world. 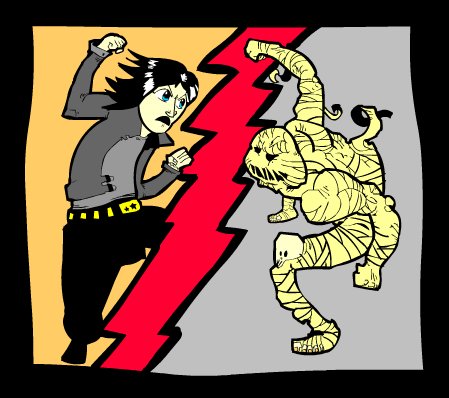 As Steve Perry was getting prepared to varnish his newly built deck, he felt a disturbance in the force of chi. it was if a thousand tiny voices were crying out to him. Then he remembered that he had a thousand babies stored in his basement for shipment to a Thailand shoe factory and went back to work on his deck. After only a few brush strokes of the varnish, Steve Perry felt the disturbance again. This time he knew something was amiss and ran inside to get on some clothes. Steve Perry mostly varnishes in the nude, for it is his way.

After putting on his glittery concert shirt and tight jeans that showed off his distrubingly large package, Steve Perry leaped out of his 2nd story window and transformed into a beautiful red bicycle that fell and clattered against the sidewalk. Then Steve Perry drove like the wind towards the direction of Africa. What dangers lay ahead, he knew not, but he was Steve Perry, who catapulted Journey into America's #1 rock band with hits like “Don’t Stop Believing’, and “Lovin’, Touchin’, Squeezin”. Surely he could deal with any evil force that dared to tangle with him. Or could he?

The Steve Perry bicycle rolled over the hills and mountain streams of New Jersey. When he reached the beaches of the Atlantic ocean, he turned himself into a blue whale. Unfortunately for our hero, he forgot to jump into the water before transforming and was thus beached, effectively putting and end to our adventure for the time being. Greenpeace was notified of the beached whale and tried to save Steve Perry by throwing water on him and signing petitions. He had used up the last of his energy in the transformation, and needed to have some rest before he was able to change back to his usual form.

A crane was able to lift him and he was put on a flat bed truck that was headed to Sea World. There Steve Perry stayed on as a main attraction for three years, delighting children everywhere, and giving guest seating in the front row a surprise shower with his aquatic trickery. After all his power was replenished with buckets of delicious krill, he turned back to his human form and took a bus back to his house, where he spent the next week figuring out his back taxes from the last three years. 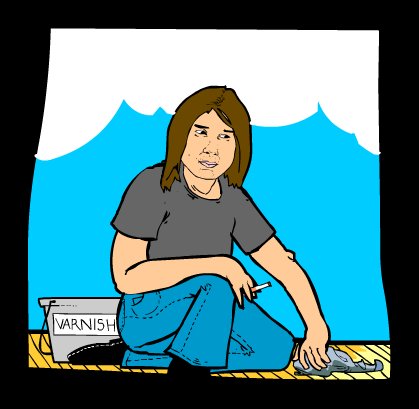 Steve Perry went back to the business of varnishing his deck. He sat down on the sanded wood, lit a cigarette, and started brushing. The neighbors were blasting their rap music again, the bass loud enough to rattle his windows. Steve Perry wasn’t having any of that nonsense. He called upon the powers of space/time astral projection to guide a meteor towards his neighbor's house, where it crashed in a fiery explosion, stopping the noisy racket at its source. Steve Perry turned on his own music, Journey’s Greatest Hits, Volume #3, and cheerfully went back to the varnishing.

After his lunch of a dozen Arby’s roast beef sandwiches, Steve Perry walked to his mailbox to see what had come for him that day. One letter boldly stood out from the handfuls of fan mail, for it was midnight black and had the words “DIE STEVE PERRY” written in blood. Who would send such a letter? Everybody in the world loved and cherished Steve Perry and his soothing voice. Steve Perry opened the letter in anger, reading it with shaking hands. It read:

“Dear Steve Perry. You are the worst musician in the world. When Gregg Rolie from Santana started Journey in 1973, he had a vision of musical integrity and experimentation. Then you came along and turned it into sappy bubble gum “rock” that makes me sick. Of course the public ate it up, because they are mindless sheep and will buy anything, but that doesn’t make it good music. Most of your hit songs are played for preteens at roller rinks and turned into Muzak for elevators. I will crush you for ruining the progressive jazz-rock of early Journey I loved so dearly. WE WILL DO BATTLE, YOU AND I!

It is rare that Steve Perry loses his temper, but if you are unlucky enough to see it and live, you will know it is something to be feared. It took one thousand years for the earth to heal itself on the spot Steve Perry had his famous temper tantrum of 1986. After destroying everything in a 10 mile radius, Steve Perry turned into an F-16 jet fighter and flew towards Madagascar at supersonic speeds, ready to kick some mummy ass. 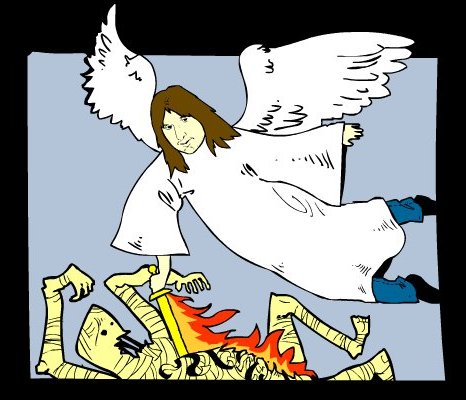 The F-16 soared over the African mainland, once and a while dropping laser guided bombs on scattered huts because Steve Perry was still really mad. After landing at Madagascar International Airport he turned into a horse-drawn carriage, but instead of horses he had to use tapirs because the flight drained much of his power. Steve Perry headed towards the return address of the hate mail. He knew it was probably a trap, but it was a risk he had to take.

The address turned out to be an ancient pyramid on top of a craggy mountain in the northern section of the island. “This doesn’t feel right”, Steve Perry thought to himself as the tapir drawn carriage pulled up to the cobweb covered entrance. He turned back into his normal form, and in his hand a flaming sword that he had named “Sal” appeared. He had used it to vanquish many foes over the years, and this one would be no different. A Steve Perry-hater was not to be tolerated in this solar system, not while he still had the strength to fight for the freedom of mainstream rock vs. progressive jazz-rock loving mummies. Steve Perry walked into the cold, dark pyramid, ready for battle.

The dark claustrophobic passages wound through the pyramid in a confusing array of twists and strange angles, lit only by Sal, the sword of justice. Steve Perry walked onward, a deep sense of danger overcoming him. His foot came down on a loose piece of stone and there was a sharp click. The ground opened up beneath him, and he fell into the mummy’s devious trap.

Steve Perry fell for what seemed like eons. Most of the time he was surrounded by solid rock, but sometimes the sides would open up and he could see endless catacombs filled with skeletons and imps. A group of the unnatural creatures heckled and screeched while he fell past, but Steve Perry shot a fireball, destroying the lot of them. Then he hit the ground, cracking the stone beneath him. He was in the mummy’s lair.

Inside the relatively small room was a basic living quarters that consisting of a cot, a worn couch, some wooden crates for sitting, a 27" color TV, an Atari gaming system, a stereo, and various band posters of groups like Rush and Boards of Canada. The mummy was in the middle of packing a bowl in his sarcophagus bong when he looked up at Steve Perry in mild shock.

“Wow, you actually came. I knew your ego would get the best of you. You represent the downfall of music since the mid 70's, and today I will kill you. Lemme just take a few tokes first,” the mummy said while trying to find his lighter.

“Toke this, toilet paper head!” Steve Perry cried as he jump kicked the bong, making it explode into thousands of tiny shards

The Madagascar Mummy screamed in anger, charging at Steve Perry with his flailing arms. Steve Perry deftly leapt into the air, sprouting angel wings and striking down with his flaming sword. The mummy was slashed across the arm, and emitted a high-pitched shriek of rage. The mummy then picked up a crate and smashed it over Steve Perry’s head. He fell to the ground, dazed. Then the mummy ran at him, seeing an opportunity to finish him off, but Steve Perry was far from beaten. He rose just in time and spin-kicked the mummy into the TV set, sending a shower of sparks into the air. The smell of burnt mummy filled the air as it rose to attack again. Steve Perry waved his hand, turning all the progressive art band posters into Journey posters.

“NOOOOOOOOOOOO!” the Madagascar Mummy screamed at the defilement of his holy music shrine. He attacked Steve Perry in unchecked rage, swinging his powerful arms towards his head. Steve Perry flew into the air out of the mummy’s range, and then swooped down with and slashed it deeply across the chest with Sal. The mummy was smitten into a smouldering pile of bandages. He was defeated and Steve Perry was once more victorious. Steve Perry found 150 gold pieces and a healing herb.

Steve Perry walked confidently out of the pyramid, which shook and crumbled behind him. All the evil that once festered in this place was now either destroyed or closed off from the outside world. The balance of order in the universe was once more restored. Steve Perry turned into a water balloon and rolled into the sea, eventually floating back to the New Jersey coast. Once there, he finished varnishing his deck, standing proudly to survey his creation. Just like Jesus, Steve Perry has the power to create great things in this world, and what could be more great than having a BBQ outside with friends while enjoying some frosty brews? Steve Perry smiled and looked up into the heavens. It had been a grand adventure, and he wouldn’t trade it for all the platinum records in the world.

The Adentures of Hitler Dog #3

Please enjoy the latest adventures of Hitlerdog as he joshes around with his friend Bobby and ends up learning a little something about life in the process. THE INTERNET WILL SET YOU FREE.