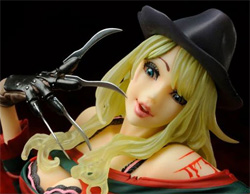 A man opens a box labeled "best animes" and Freddy Krueger is screaming and laughing on the cover of all of the discs of One Piece.

A peppy college girl tries to download some mp3s using a Napster program, but this program is Fredster and it's actually Freddy. She starts to play a Metallica song and Freddy appears on the screen. "Sorry, the only nap you get to download is a dirt nap," he says referencing the company Napster.

Kids on spring break go to a cool bar and try to order some mixed drinks but the bartender doesn't know how to make anything because the bartender is FREDDY! "Wet t-shirt contest!" he says and stabs them. 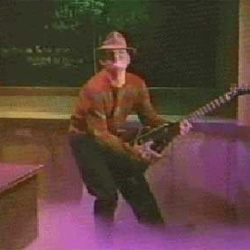 A guy tries to find "Repeat Album" on his iPhone and instead finds "Repeat Freddy" who never stops laughing over every track.

Freddy is a pizza that wants a slice of some guy. You'd better believe Freddy gets it. A slice that is.

Freddy turns into a pair of sneakers and makes a guy slam dunk with slam being the important word in "slam dunk."

A girl wise to the Freddy dream attacks tries to stay awake, but she can't help it. She falls asleep and Freddy is waiting for her as a drum kit. There is no explanation for this but she is forced to play him until her arms fall off. "Drum roll!" he says and rolls over her crushing her.

A cool and sexy babe loads up Facebook to go to Zack's Facebook page but it's really Freddy's face and all of her friends are Freddy posting about politics.