I'm Begging You, World, Shut Up About Angry Birds 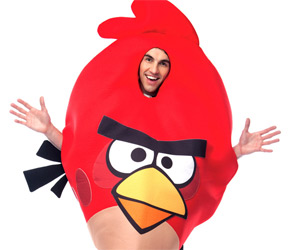 May you slowly roast in a fire that begins on your genitals.I don't want to rant, but I can't handle this anymore. This can't still be going on. Please. Please for fuck's sake. I kept quiet through the normal backlash phase. I just wanted this to be over with and it keeps going.

Enough with the Angry Birds. The game has been out since 2009. Everyone shut up. 500 million downloads. Everyone knows about it and it's over with.

My grandma has a high score she wants to talk about. She wants to tell me about this app called Angry Birds. Yeah, that's awesome, grandma. It's so great we're connecting over this technology, I just wish we weren't connecting in the past. How about you rap a song about it and I can send it into America's Funniest Videos because we're in 1994.

Mo Rocca just made a "pigs will fly" Angry Birds joke on Wait Wait Don't Tell Me so I think it's time to get DNR tattooed on my chest and run the car in the garage. Is this what you wanted? The local news did a story on Angry Birds. Check it out in the App Zone. Stop it. Just stop. 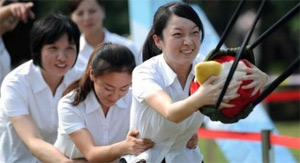 At least the Chinese lead an equally meaningless existence.Google+ added Angry Birds. A year late. Way to be, Google+. I never want to hear about you again either. You press-released adding year-old game to your social network. You're finished. I also heard I can play Angry Birds on Roku. What the fuck? Who wants this? Who are the people asking for a Roku to play Angry Birds on? I'll just barely excuse you playing that game in 2011 on the train. If you go home and play it on your TV then just end your life now. Get out of here. Get out of this universe.

You can build your favorite Angry Bird at Build-a-Bear now. It's so hard to decide between the red one and, nope, fuck you. There used to be some sort of integrity to building a bear. It used to be about bears. Once you expand that to birds you've let the whole concept get away from you. You're down in the machinery of reality.

Some people at MIT dressed up as Angry Birds and shot stuffed birds at towers. Nope, not 18 months ago. This happened over the weekend. Those goofy birds! What will they do next? Probably the exact same thing they've been doing over and over again. 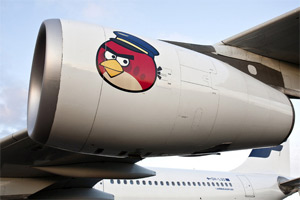 Please crash, nowhere near a pig.It took years to get people to shut up about Bejeweled and that didn't have any cartoon characters for fat ladies to cover their desks with. I'm fucked. We're all fucked. Did anybody not see an Angry Birds Halloween costume this year? If not I may be interested in swapping lives with you.

They opened an Angry Birds theme park in China. By "they" I probably mean "the devil."

I wonder if somebody has recreated Angry Birds in Minecraft yet? Ha ha! Just kidding! Of course they have. Why just play a stupid fucking game when you can spend hours tediously recreating that game in another stupid fucking game? Yeah, you heard me Minecraft nuts. The world is burning and you're recreating Star Wars using virtual Legos. Are you eight? Stop it.