Manowar Fans, submitted by Laura. Who remembers the band Man O War? Me either! But they've got a web site and they have a bunch of really ugly fans. Who could have imagined a has-been metal group would have fans almost as ugly as comedy web site fans! 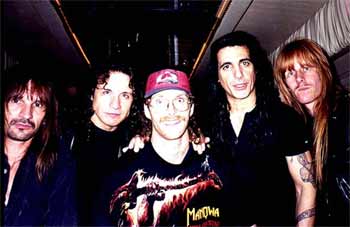 My name's Bryan. A true Brother of Metal from Canada, where Manowar isn't exactly a household name yet. The photo I'm sending you was taken at the proudest moment of my life. October 7,1999. The night I first saw not only in concert, but in person- the Kings Of Metal. Two days on a Greyhound bus (and for someone who's 6'8, that's a test) to make a dream come true in Columbus, Ohio. Hail to the Kings and all who inhabit the Kingdom of Metal!!

They don't have very many fans. Luckily the ones they do have more than fill the ugly quotient for an entire Megadeth concert.