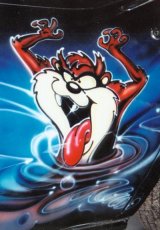 If this image thrills you, please email me and explain why ... On second thought, don't.I wanted to sit in the sand and stare at my palms for awhile, but Brannen said we should explore the boardwalk. Unlike Hampton Beach proper, which looks like every other beach except slightly dirtier, the boardwalk has a style all its own, one best described as [placeholder for entire text of Spencer Gifts.com]. The shops sell things you'd buy at a third-world Disneyland: drug rugs, lava lamps, neon beads, and "wacky" t-shirts rejected by Hot Topic. Everything is overpriced, reflecting a vacuum of demand: instead of selling $5 shirts to 50 dumbshits, vendors sell $50 shirts to 5 megadumbshits. One store had an airbrushed mural of Bugs Bunny, Ren and Stimpy and the Tazmanian Devil in its entrance. That fact that someone, after careful research, concluded this image would increase their clientele is unnerving. We weren't brave enough to find out what the "fans of airbrushed cartoon characters" demographic buys. Probably goat's blood, shrunken heads, and femur bones of children.

At the time of our visit, Hampton had two arcades. One burned down a few months later. Fortunately, it wasn't the one we went to, because if it ever burns down, the owners probably have a video of me saying I want to burn it down while kicking a pinball machine. Most of the games at Hampton are dirty, broken, or predate technology. The most odious is Sega's Titanic, an analog game with a capsized Titanic spinning in a whirlpool. The chutzpah to turn a thousand drownings into a game, let alone one it's impossible to win, is unfathomable. I wanted to get a refund, but couldn't climb the vertical floor leading to the counter. Another complaint about Hampton's arcades: they're specifically designed to be unnavigable on acid. 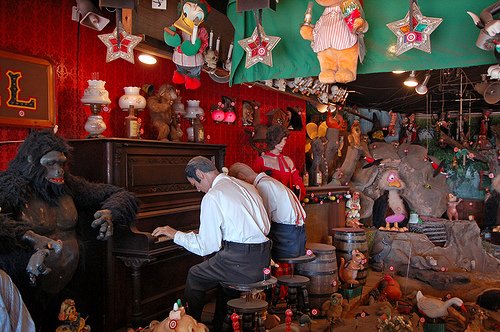 In hell, this is all you see.

After wandering the boardwalk a couple more hours, we found ourselves in an animatronic shooting gallery. Like all things animatronic, it was concentrated nightmare fuel - think Chuck E. Cheese's crossed with Micheal Crichton's Westworld. It had zombie cowboys, demon raccoons and a giant robot bird. The bird in particular spooked us, cawing in its Cthulian tongue while fixing us in its black-hole eyes. Five times we attempted to flee this nightmare, but kept finding our way back. Then Brannen saw a sign that said "No Flash." Thinking this was the bird's weakness, he flashed it with his camera, making all the robots light up and make horrible sounds that drowned out whatever the gallery owner yelled at us as we ran away.

The acid was wearing off, so we decided to leave. But first we stopped at a hot dog stand for $12 frankfurters. While eating, we saw a guy in his 20s with a neckbeard and elf face, strutting down the street with his mediocre girlfriend like he'd just won the Superbowl and climbed Mt. Everest in the same day. This guy was the avatar of Hampton Beach: fat, slovenly and way prouder than he should be. Also, he was wearing a Sublime t-shirt, which Brannen said should say "Sub-lame," and I suggested should have a picture of a sub because he was fat.

I guess the guy heard us, because he shouted a curse word. But in his coarse voice I heard a tinge of vulnerability that said he hated the beach and his life and the sad undertow of poverty and drug use that had suffused both. Then he was beautiful to me. Until he spat in my face. Then I hated him again.