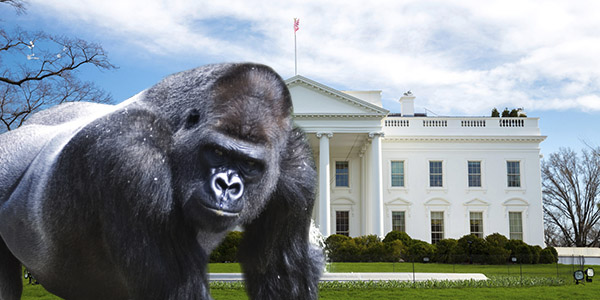 We're scarcely a week away from the 2016 Presidential elections, and would-be pundits can't stop tossing around blame like so much pizza dough. From Bernie Bros to Stein's Monsters (a term I coined that failed to catch on), no one can hide from the pointing finger of recrimination. Frankly, it's hard to believe Trump will be our next President in just a few short months, and, like many of you, I fear for our future--even if I didn't vote for Hillary. That's right: I like to think outside of the box, to the point where I don't even consider third parties, which happen to exist in another box orbiting the larger, more popular box. Unlike half of the country, I got out there to vote. But apparently we live in a binary choice faux-mocracy, since my write-in vote for Harambe Gorilla has earned me nothing but scorn since that fateful Tuesday.

Believe me, I was counting the Facebook likes before then. By the time 6:00pm rolled in, I was staring down the barrel of 28 social media approvals of my Presidential choice. And before you jump to any conclusions, know that I take all of this stuff very seriously. It's one thing to just tell people you voted for Harambe Gorilla. Sneaking a gorilla mask past a group of alert, 87-year-old polling workers? That's another story altogether. (Unfortunately I didn't realize I dropped my banana in the parking lot until it was too late.) When friends saw me in that mask, pointing at the ballot, they lost their damn minds--and the caption "POLLS OUT FOR HARAMBE" was just the icing on the cake. Sure, my mom might have posted "I'm very disappointed in you," but that's a little inside joke we have that I'm still waiting for her to explain.

I've managed to laugh off the haters because, in fact, my vote for Harambe Gorilla was incredibly brave. I mean, we're months away from the inexplicably hilarious slaying of a beautiful gorilla, meaning I was playing with the fire known as meme-shaming. I know because it happened to one of my dearly close family members. Last summer, my Aunt Judy posted a video of the Chocolate Rain guy to my Facebook wall with the comment, "LOL this made my Monday, Jeffrey! Hope it makes yours!" Of course, I did what I had to do, and minutes after replying with "Yeah it made my Monday TEN YEARS AGO you dumb slut," we were no longer on speaking terms. Let me tell you, when you cast a joke vote, you put everything on the line--even family.

You think the 2012 election was a complete blowout for Obama? Looks like someone's been drinking the two-party-system Kool-Aid. While you were out there choosing between vanilla and French vanilla, I was sweating it out in a voting booth, my brain wracked with a much more difficult choice. I'd been in there so long that, beneath the curtain, I could see one of the old ladies shuffling over in my direction in the hopes of catching a notorious "booth 'bater" in the act. But before she could destroy any sense of privacy with her gnarled collection of fingers, I bit the bullet and finally went with my heart: Grumpy Cat. People mocked me, but four years later that adorable mound of genetic deformities is still as popular as ever, while Mitt Romney is presumably still doing whatever he does outside of running for President.

Ultimately, what does it matter? The President is just a meaningless figurehead--another sock puppet to slip over this parody of democracy. Anyways, I got plenty of other stuff to worry about, what with how I just got fired for taking time off to vote. My only solace is Obamacare, which covers my debilitating brain condition, and I assume that government program will never go away no matter what. So, dicks out, gentlemen, for whatever you believe in. That's the principle this country was built on.