Blue Stripe - The Life and Times of a Harkonnen Florist

Hours later, as the baking sun of Arrakis rises into the morning sky, we are done. Exhausted, Rhayt and I sit on a pair of folding chairs, drinking lukewarm bottles of Caladani wine captured from Atreides stocks and admiring our handiwork.

"Adjustments had to be made," I say, referencing the destruction of several of boxes of the flowers used to recreate the the Baron's facial deformities. 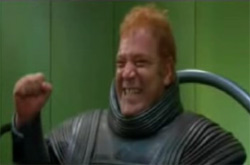 He looks happy. He's not. He's never happy.The heat is becoming unbearable. I have always hated hot climates. My therapist said they heighten the sense of oppression, but I think the heat just reminds me of the time my father put me in an oven. Funny guy, on my birthday one year he got out of his mind on Semuta and threw my mom off the roof. I asked him why he did it and he said because she was afraid of heights.

"The big arrangement!" Roars a deep voice from behind us.

It's The Beast Rabban, swilling the same wine as us from an oversized kitchen jug. In his other hand he carries a hunk of meat with the fur still attached on one side.

"Yes," I stand courteously, "You are over there next to-"

"Mmm," Rabban shoves me aside and stomps over to the arrangement.

He inspects it for several seconds and then spins to face me.

"Why," he shouts and then pauses to chew and swallow, "is Feyd at the Baron's right hand?"

"Your uncle seems to be so fond of-"

It's the wrong thing to say. Rabban roars with anger, smashing the jug of wine on the floor and bowling Rhayt over with the thrown hunk of meat. He lunges forward and grabs me by my shirt. Strong guy, reminds me a little bit of a tractor I used to know.

"You will move me to where Feyd is," he spits pieces of greasy meat into my face as he talks, "or I will snap your spine."

My back cracks as he squeezes.

He lets me drop and storms off, no doubt to help a matron across a busy road or splint the leg of a wounded animal. Rhayt helps me up.

"You heard him," I groan, "start moving Rabban to where Feyd is standing."

We barely have time to complete the task before the victory celebration. At least if we fail Piter won't be the one who kills us. Nefud is so much nicer. He will just snap your neck or pull your heart plug. Very straightforward and honest. I like that. 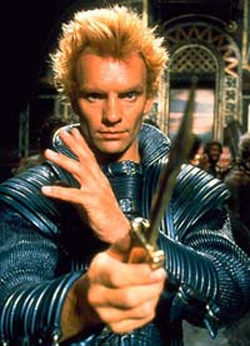 Here I go again!You see, I leave it all tense there at the end like maybe old Eugene is going to bite the big one, but of course when you stop and think about it that is just silly because I'm standing right in front of you.

The Baron and Rabban were both very pleased by the arrangement. Bands played, troops marched past the palace in formation, and prisoners were paraded down the wide boulevard of Arrakeen city.

When the fanfare outside ended, the Baron's honored guests retired to the cooler interior of the palace and marveled at my detailed depiction of the Baron, his family, and his men standing over the defeated luminaries of House Atreides. It really was the greatest work I have ever done. Perfect down to Gurney Halleck's smashed baliset. I was toasted as a genius. The Baron even personally thanked me for my fine work in executing "his plan" for the arrangement.

I returned to Giedi Prime some days later with the bulk of the Harkonnen forces. I was greeted at my office by Feyd-Rautha and a few members of his repulsive retinue. He made no attempt to conceal his anger.

"This," he slapped down a picture of the arrangement constructed on Arrakis, "is bollocks."

I don't remember much after that. I know that he strangled me to death. My therapist says I relive the strangulation in my head too much, but how many times has he died?

What really strikes me as strange about the whole situation, is why did the Baron have a heart plug installed on the new me? That's like paying for a boat that comes with a hole in it. He obviously thinks I'm important enough to bring back as a ghola, but not important enough to not kill in the first place? A tyrant and his money are easily parted, I suppose.

The Bene Tleilax grew me in an axolotl tank right next to an Atreides named Duncan Idaho. Come to think of it, he was in every tank no matter which way I turned. Nice guy. Must be pretty popular with somebody.