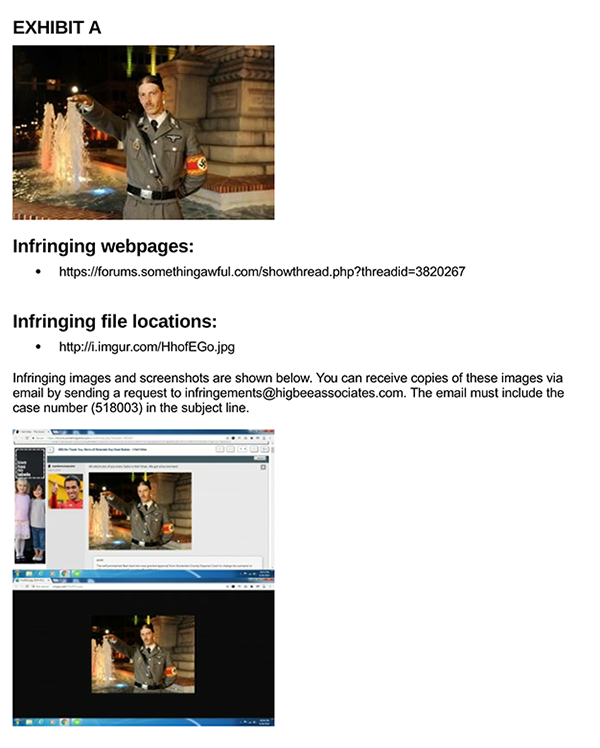 As you can clearly see, I had been given a bill for nearly $7,000 because somebody on the Something Awful forums linked to an image of Hitler, a file being hosted on the third-party site Imgur. "Now wait a minute Rich 'Lowtax' Kyanka," you may be saying to nobody in particular. "How can you possibly get sued for somebody linking to an image hosted on a third party site?" The answer is simple: because Higbee and Associates exist.

This garbage dicked law firm generates nearly $5 million a year by encouraging photographers to sign up with their company, then performing a reverse image search for anything matching their client's submitted photos. An automated system then flags the suspected offending site, spits out a super scary legal threat based off a template, and delivers it to the site owner. Upon receiving the notice of possible legal action, many victims freak out and pay these idiots the stated arbitrary amount of cash, under the looming threat of being taken to court for $150,000. Higbee and Associates operate one of the biggest dirtbag law firms to ever pollute the internet, preying on fear and dealing in bulk.

Unfortunately, in my 20 years of running this site, I've been forced to brush up on general copyright law, and I damn well know that linking to an image hosted on a third party image site breaks absolutely no law, even if it is digital, lossy compressed Hitler. With Leonard "J." Crabs unavailable (ie, "drunk"), I was forced to strap on my legal gloves and get to work fighting against the forces of evil threatening my freedom to see an image of Hitler.

I have an even better idea: I'm not going to pay you a fucking dime and you can go fuck off to hell for eternity because I am absolutely in no way responsible for images hosted by a third party service, in this case Imgur. Go fuck yourselves and prey on some other website that hasn't been around for two decades and knows damn well what their legal responsibilities entail, and what they're responsible for. Your entire law firm is a straight up piece of flaming shit that tries to intimidate folks with EXPENSIVE LEGAL THREATS in the hope that your extortion scheme will work on some of them. I am not one of those people. So I cordially invite you to take your pdf, print it out, and ride it like a sybian until the cows come home. Then I invite you to fuck the cows as well.

PS: You morons previously threatened to sue me for using a public still from a movie for a movie review. How'd that work out for you? I don't remember you ever taking me to court, on account of the fact that your threat was, once again, complete bullshit.

PPS: Did I mention you should go fuck yourselves? Please do, in the chance I forgot.

Take me to court, motherfuckers.

I thought that my message came across reasonably clear, despite my lack of complex legal terminology. Unfortunately, Hitler's reign of terror was merely beginning.