The Semiotics of Ice-T 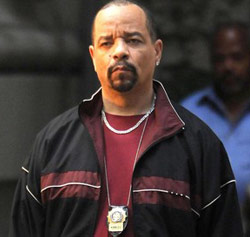 Plump and Saintly. Having past through the crucible of adulthood, Ice-T enters midlife fattened by wealth and content to serve the very agents of oppression which he fought against in his youth. This is the arc of America, of the immigrants and of the young, to be oppressed by individual and institutions, to fight back, to rise through hardship and to achieve happiness in later years. And then, as is so often the case, to feel entitled by this very struggle to wealth and privilege and hostile to encroachment by the young and the immigrants. Put another way, Ice-T is now the willing servant of the very zaibatsu he once would have dropped a burning car upon. 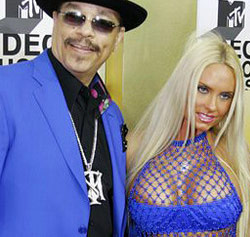 Cartoon Couple. Having completed his transformation into a living cartoon character, Ice-T has used his new power and wealth to create a flesh and blood wife from an R. Crumb illustration. She raps about shopping and orgasms and appears on the cover of magazines for butts. He dresses like he's trying to disappear into the background set of a Paula Abdul video from 1988 and his pimp bravado, more extreme than ever, registers as unintentional self-parody. Both Ice-T and Coco are less believable than Kangaroo Ice-T.