Success is Always Having to Say You're Sorry

Zack Parsons, I apologize for breaking your extremely rare limited edition Hitler's preserved brain. I knew how much you wanted to merge history's most evil dictator's brain with your own to learn his secrets of world domination and rule the planet. If anyone could murder more Jews, Gypsies, and homosexuals than Hitler, I'm confident it'd be you. I hope you find another Hitler's brain on eBay and make your dreams of a Europe unified under Germany come true.

Livestock, I apologize for having an affair with Moof, your life partner of 27 years. While some of the blame rests with him, I admit I seduced him with my Middle Eastern wiles that are impossible to resist. It's time for our readers to know why the Moof chatlogs have stopped. It was me that caused your fairy tale romance to break up. Is there anything I could do to make you forgive me short of threats and harassment? Let me know.

To Dr. David Thorpe, I apologize for exposing to the media that you are not a real doctor. Sure, they told me that nobody gives a damn who Dr. David Thorpe is or who I am and had the police come and arrest me, but that didn't make it right. I am truly sorry. 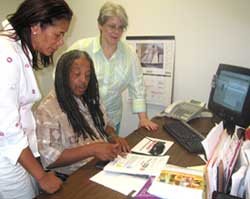 Here's DocEvil and I going over an update together. Just kidding, I've never talked to these people in my life!To Dennis "Corin Tucker's Stalker" Farrell, I will never apologize to you. I don't care what the CNN web site says, you're a morally bankrupt, evil man. I take pity on you for everything you've done in life. I know this is supposed to be a funny web site and this update has been one big joke until now, but I cannot joke about what you've done. LEAVE CORIN TUCKER ALONE YOU FREAK!

DocEvil, what I did, I did because of alcohol and anger. I also apologize for not thinking of anything better to say for your part and stealing a line from The Simpsons. It's not a rip off, it's an homage!

To Ian "Salmon Season" Golding, I have never met you, but I hope to someday wrong you in horrific ways so I may apologize to you and climb the corporate ladder. By the way, is your grandmother still alive? Oh, no reason.

To Maxnmona, I apologize for informing you that Grim Fandango was grossly overrated and that adventure games are pretty much all boring which is why Tim Schafer made Psychonauts a platformer because he wanted to make money and if he made it an old school adventure game he would be eating a rat he killed with his shoe in a boxcar right now. While I still feel that way, I didn't have to jam you in the eye with a red hot poker while I said it. For that I am sorry.

To BobServo, I want you to know that I didn't really mean it when I said I would murder you in your sleep and take the Thursday update spot as my own. Letting my anger about sharing Thursdays with you fester within me until it exploded in a furious display on your front lawn is my problem, not yours.

I apologize for exposing you, your wife, and your children to my rage. I understand now that I shouldn't have dressed up in a Donald Duck costume while I did it, scaring your son by making him watch a strange man scream at his father while drunkenly waving around a golf club while dressed up as his favorite cartoon character. I hope you can explain to your son someday that Donald doesn't really think the Jews started all the wars. Sorry about that one old friend. 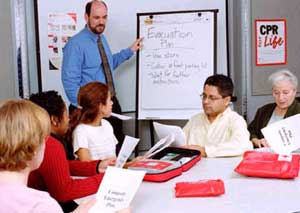 A common CPR class. The students are debating which one of them should have to practice with the old bag.To P. B. Fouke, I don't have to apologize to you because you're a fictional character that Livestock created with his mind. But I'm going to apologize anyway, because I'm going to be rich someday, and rich people apologize even when they don't have to according to some stupid study I found on CNN in a futile attempt to find a topic to write about.

To the children Lowtax exploits for cheap labor, I want to apologize for caving in that tunnel you guys were digging to freedom. I know how much that freedom must've meant to you. I also apologize for helping Lowtax whip you for attempting to escape in the first place. Finally, I apologize for teasing you with the riches Lowtax awarded me with for stopping your escape. I feel your pain. Working in Shmorky's closet tweening his Flash animations for dog food rations must be a hard life.

Wow, what a premise for an update! I don't know how I do it. With all these apologies I'm sure to hit the big time. All there is to do now is wait for the money train to come rolling in. Not that there's any work to be done or anything.

Dear God I hope CNN is right, or it's back to hooking for me.