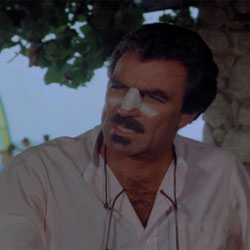 Magnumpi contacts his old friends TC and _____ from the war. They have a good conversation and some laughs over beers and burgers. _____ is trying to _______ with a woman he just met, but Magnumpi ignores this and continues a conversation with TC on the subject of China.

Chinese eaters have been spotted on Hawaii island and the zone wardens are unusually active. Sunken eyes and smelling of the sea says TC. Magnumpi doesn't believe him and goes surfing and he finds a beautiful woman who turns out to be Chinese. Rather than report her to one of the zone wardens Magnumpi takes her to stay at Higgins castle.

Are you a Chinese eater? He asks.

You ARE a Chinese eater! Magnumpi fumes and is ready to call the zone wardens but she shows him a tattoo from a medcenter in district 20. This is where the Armor Corps is experimenting with new suit interface technology. Bioroid suits they call them. Half-alive armored suits made from cloned tissue. 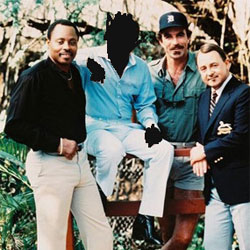 Magnumpi discovers that the bioroids are being made by a company working for Armor Corps and trying to develop better suits from Chinese organ slaves. They will eat themselves anyway says one doctor they are meat mad freaks. When one of them dies the others eat them.

Conflicted about what to do Magnumpi retires to his darkened bedroom with the Chinese woman. Sexual intercourse is implied. Following the sexual intercourse Magnumpi snaps her neck saying We all die sometime better this way. Magnumpi loads her body into his Ferrarocaster and throws her off a cliff and into the ocean.

The final shot is of tiny silver fish eating her eyes.