To say that residents of Chicago and Illinois were apoplectic would be an understatement. In the city any Lake Michigan environmental news makes big headlines. A couple years ago zebra mussels somehow got introduced into the lake and the papers here must have devoted twenty front pages to the subject. Of all the underhanded things to do to the city, Indiana and BP had managed to find the one that people really do give a shit about. It was worse than the Colts winning last year's Superbowl, which is to say it was nearly apocalyptic.

The campaign was not marked by sweeping advances.Some outraged Chicagoans pointed to BP's frequent TV ads claiming the company is environmentally conscious and cried foul. Many directed their ire at Northern Indiana, the leech that feeds off our soft underbelly, making a pitifully small profit at the expense of conditions in a lake shared by four states.

Drunk on bad ideas, BP launched one of the stupidest marketing campaigns since Pets.com floated that shrieking puppet on TV. This two-pronged PR assault on Chicago involved full-page newspaper ads in city newspapers and paying bloggers (on the Tribune's "Voice of the People" section of all places) to talk about the greatness of BP and the refinery. The ads included factoids like "it's totally legal" and "the plant will still be polluting less than this other plant in Whiting", excuses that served to further infuriate the public. The bloggers, well, you can probably guess how well that worked for yourself. The only people who agreed with the blog posts were the sort of people you would have to pay to give a shit about anything other than their wallet.

BP wasn't the only one shooting themselves in the foot. Indiana Governor Mitch Daniels, long viewed in Illinois as a sort of miniature Hitler, was quick to point out that gas costs three dollars a gallon because dummies in Illinois don't want BP to dump mercury and lead into their drinking water. No one, not even Daniels, will actually say the gas will get cheaper, they just wave their hands and ominously intone that it may get more expensive faster if we don't let them dump out. 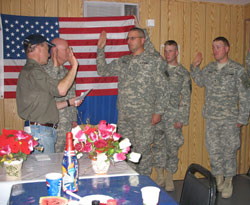 Mitch Daniels inducts new hillbillies into his Electric Hate Army in some satanic chaw-related ritual.Criticism from others in Illinois increased. Among the most vocal and hilarious critics of the BP dumping plan was Mayor Richard Hyde of Waukegan, a lakefront northern suburb of Chicago. Just weeks before the story on the BP dumping broke, Hyde had announced a 36 million dollar plan to clean carcinogenic PCBs and remove industrial refuse from a Waukegan harbor. He described the permit allowing BP to dump into the lake his community was spending so much money trying to clean as "mind-baffling."

The Federal EPA finally involved itself in early August, but statements coming out from the EPA indicated that it was either apathetic to or colluding with Indiana's environmental regulators. EPA officials threw up their hands and issued statements amounting to "we can't do anything, Indiana said they could do it." In response to deepening criticism, the EPA did finally break and issued a series of suggestions to BP on how they could go ahead with the facility and mitigate the environmental impact. Even the most expensive of these proposals amounted to a tiny fraction of the money BP would be spending on the refinery upgrades.

BP declined the EPA's suggestions. Ominous silence came from BP on the subject of the refinery for several days. A meeting with state and local officials, which included Illinois officials, did not go well for BP. Although there was very little these officials could immediately do to block the scheduled refinery upgrades, the public outcry was growing and the US Congress had overwhelmingly passed a useless measure stating it did not support the increased emissions. Careful, Congress, don't want to overdo it there with all your helping. You might pull something.

On August 23rd, the war ended, not with a bang of some deranged eco-terrorist blowing up the Whiting refinery, but with a press release quietly posted on BP's website. BP pledged that it would not increase emissions above the previous level. Uneasy peace reigns once again on the coast of Lake Michigan and an oil mega-conglomerate's pet project emerges battered, but alive, from a public relations disaster. 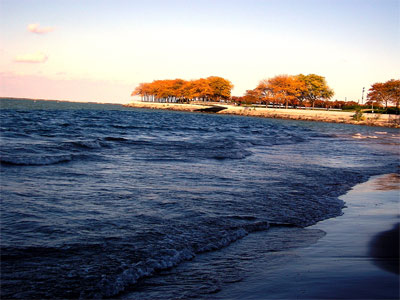