Life opens with a visceral blood-drenched scene in which I am squeezed out of my mother's womb and deposited into the harsh light of a delivery room in the tiny town of Altoona, Pennsylvania. A secluded and peaceful environment is left behind as a chaotic new world is introduced; one which is at once frightening and rife with possibilities. At times slow and repetitive, the rest of life is wildly uneven when compared to this compelling opening, but the good parts are so fantastic that they manage to make it worth checking out. 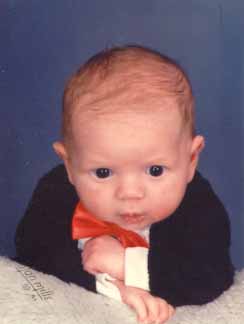 Life is certainly ambitious. For one, it is presented entirely in one perspective and unfolds in a single continuous and uninterrupted shot. Think of Scorcese's legendary introduction to the nightclub in Goodfellas or the teahouse in Kill Bill Volume 1, only imagine conveying an entire story that way. And what a long story it is. With only one third of the project in the can, life is still a work in progress. Production is set to wrap up in fifty five years, barring any unforeseen setbacks.

The plot thus far follows me through my formative childhood, into my turbulent and frankly embarrassing teenage years, and up to the point where my lifelong dream of becoming a writer sort of comes true. Right from the beginning, some terrific opportunities are passed up that could have made life much more entertaining. If I had been born a few months earlier and a few miles away on Three Mile Island, for example, a terrific plotline in which I had horrific deformities (laying the groundwork for a tearjerker "against all odds" story) or was able to shoot plasma blasts from my fists (for more of a mindless but fun action-packed tale) could have been employed. Instead, we are presented with a rather unassuming backdrop that only changes when my hard-working single mother takes me to New York and once more when I eventually settle in Florida. Yawn.

The teenage scenes are traditional shy white bookworm fare, and little thought seems to have been put into them. Okay, I'm awkward and quiet and I play a lot of video games. So what? A little originality could have gone a long way here but sadly this entire segment is a disappointment. There aren't even any sex scenes to liven things up, and the first of these don't appear until I'm 21. In fact, the amount of time spent masturbating, fantasizing about sex, and longing for girls I hardly know because I'm too shy to approach them outweighs the amount of time actually spent with them by a sizeable margin. This might have been interesting if it had driven me to become a psychopath and ultimately go on some sort of murderous rampage, but yet again an opportunity is wasted and the whole thing just comes off as a little bit sad and a whole lot boring.

Perhaps the most glaring flaw in life is the total lack of character development. The Dennis we see at the age of 19 is essentially the same as Dennis at age 25. No attempt is made to flesh the character out and have me blossom into an outgoing and normal guy. The same juvenile sense of humor and idealistic view of the world still influences my approach to nearly everything I do, and I even look the same as I did when I graduated high school, only my bad haircut from back then has been replaced with a new bad haircut. When I faced a cancer scare at the age of 24 and spent several months in a limbo waiting to learn whether my lump was malignant or benign I solemnly pledged to change my life and be the best person I could be if I survived, but after it was removed and found to be harmless I took a sigh of relief and went back to the same old routine. So much could have been done with this, but yet again a great opportunity to advance the plot went unused.

We learn from great novels and films that character development drives a tale, so what's going on here? As far as I can tell life doesn't seem too concerned with creating a cohesive story or revealing the point it ultimately may or may not have. Some other reviewers might consider this mysterious and brilliant but I find it trite and pretentious.

My gripes with the main character and his story's progression aside, life is really not bad at all in spite of itself. I think the universe is a fairly interesting setting, and the premise that we can only experience a very tiny fraction of it from our isolated position here on Earth helps to maintain some of the initial sense of wonder and possibility that was introduced in the opening sequence. While very little thought was put into me, the imaginative backstory of Earth makes up for it in spades. People have written whole books detailing the events leading up to the present time, which makes the planet feel like an environment that's actually alive and constantly changing.

Life features some stunning visuals. I particularly enjoy seeing the sun rising, the sun setting, and the sun sprinkling two gigantic scoops of raisins on unsuspecting villages. I like to think that the poor villagers being bombarded with thousand pound raisins are also allergic to raisins, because damn you'd have to have bad luck for that to happen. These are really the only sights worth seeing, but they're pretty great. 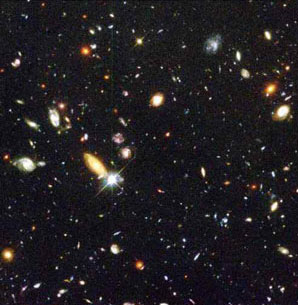 The universe as we know it. Consensus: Not too shabby.

What really impresses me is the attention to detail. Dogs have literally thousands of individual hairs covering their bodies, all of which move and react to outside forces realistically. There are all sorts of languages out there that I don't even care about and will never use. When I go to the store and grab a case of soda there isn't just the one waiting for me, but a whole shelf of them for a bunch of people I'll never lay eyes upon. Heck, if I kicked down a random house's door I would find a uniquely furnished home with tons of hand-placed objects decorating the place. The effort that must have been put into all of these details which aren't central to my life in any way is mindblowing.

Life manages to be quite funny at times. My favorite such scene occurs at the age of 19, when a friend and I are sitting on a beach and absently digging a hole in the sand just past the reach of the approaching tide as we talk. I look down at the hole, cheerily declare that I could probably fit my head in it, and plunge in without hesitation. Just then, a surging wave rushes forth and fills the hole, mixing with the sand to form some sort of hellish suction chamber of doom and wet sand. I freak out and attempt to pull my head out, only to find that the suction is stronger than a thousand really strong ants or ten hundred weak, yet much taller, ants. I flail and panic for a solid twenty seconds as my friend laughs, and finally the sand dries just enough to release its deathgrip on my cranium. After shaking my head rigorously, I glance at my friend's stupid laughing face and realize with no small amount of horror that I cannot hear his laughter. For the next two weeks I am only able to hear the loudest of sounds through the cemented mixture of earwax and sand compacted in my ear canals. The slurry that trickles out of my ear in the shower on the glorious day I regain my hearing resembles the diarrheic bowel movement of a cat that has eaten nothing but kitty litter for a week.

Undoubtedly the best part of life is aluminum siding, which is pretty much like normal siding but it lasts a lot longer and is much easier to clean up after someone throws their colostomy bag against your house in a fit of colon-induced rage or after your house falls right in a mud puddle on class picture day. As you might imagine aluminum siding is a hot-button issue for some people, and has created a deep seated hatred between its detractors and protractors. The fight will likely go on pretty much forever, long after aluminum siding ceases to exist and humans evolve into some sort of sentient soup that's really quite delicious but still OFF LIMITS, even if you are really hungry.

While I can only comment on the portions which are complete, I'd have to say that I recommend life. It's not quite as good as Batman Begins, but if you've already seen that I'd suggest giving it a chance.