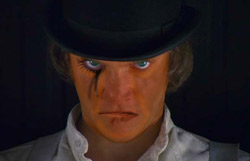 There was me, that is Boehner, and my three droogs, that is Bachmann, Cantor, and Allenwest and we sat in the Politnok lunchbar trying to make up our rassoodocks what to do with the evening. The Politnok lunchbar sold lunch-plus, lunch plus apple or jello or navybeansoup, which is what we were slurping up. This would fill you up and make you ready for a bit of the old beddy weds. Great uproarious rips tearing up the old tainty waint and squeaking out the cheeks my brothers.

It was Allenwest, as is usual ways, who wanted us in for lashings of the ultraviolence. New to the gang and gulliver full of yarbles, great swollen yarblockos brimming to his glazzballs. He says every droog needs a pooshka and has the right to cavort down city-ways no matter what the millicents say. No, no, no, No-ey, no, I says, my little droogies. Read the moldering papers we must. Aloud with all the dedoochkas and take out the parts about the darkies and wampums being only less than a single man.

Then it's off to get the real pretty polly, it is, off to the commitskis and the way of the means, my brothers. Where the real business is done and none of this ultraviolence. Allenwest didn't like this one bit and was joined in a chorus by Bachmann.

"Got to put the mendyments in there for the slamis," she says. "Got to ban their baddiwad nuns clothes on the aeroway. No mosque at the zero ground. God back in the learny hotel." 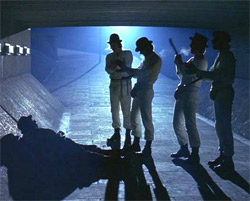 "Best for a walk now, my droogs," I did declare and we marched rather than think overlong on what Bachmann has said.

One thing I could never stand was to see a filthy, dirty old welfarie, jobless as a dog and with twice again as many anchor malichiks. Living on the dole and spending his cutter on redbox rentals. Taking too many ticks and picking Expendables. Too much money from the dole, my brothers. Too many fruit pie plus options at the bodega. I could never stand to see anyone like that, whatever his race might be, but more especially when he was brown as butcher's paper and pressing 2s on the redbox language menus like this one was.

Imagine my droogs and I as we set upon this foreigner tapping away, picking out Human Centipede. His green stuff wasn't taking into the mechano and so he asked, "Can you spare some cutter me brothers?" which was answered with a bit of the ultraviolence.

"Go on, do me in," he blurped, "you bastards like this, I don't want to live in a stinking country like this."

"Oh? And what's so stinking about it?" I say with my gavel on his guts.

"There is no law and order!" he says.

"Ha ha!" we all had a good laugh my brothers. "Law? We support capital punishment...for border jumpers." 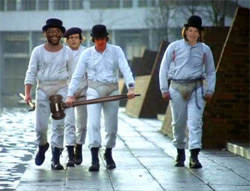 The Red Vino did flow then. Some vintages better than others but all looking the same ways when poured out. We were all feeling a bit shagged, and fagged, and fashed after. I says it's time to get back to the Kongress but Bachmann and Allenwest has had a talk my brothers. Secret like behind the backs of your faithful narrator. An uprising! A treason! I looked to my faithful droog Cantor and not a lick of help from that grazzy yahoodie, he only backs away.

"I'm sick of being treated wrong-ways, Boehner," says Allenwest. "I'll meet you Harleys of Davidson katana sword on gavel any day of the week."

What could I do? I let the salty drops come flow-flowing out of my glazzys, my brothers. I just feel things overmuch I say. I tell my unloyalful droogs that we'll teach dinosaur riding to the little ones, make the lewdies swear an oath to old stripey stars, and we'll give out cannons and Camel Cash and krovvy drills for all my brothers.