The New Age of Sandwich Warfare 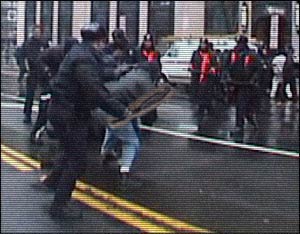 Early footage of the hoagie baton being tested on human subjects.After decades of secrecy, the United States Military finally lifted the veil of silence on ones of its most critical and costly covert projects. As quietly and effeminately as a mime, they let slip the news that they're developing a sandwich capable of lasting up to three years. Obviously, this super sandwich stands to usher in a new era of sandwich technology. Traditional sandwiches are made to last only a short time, from a few hours to a few days, but usually never longer than a week. No one knows exactly why sandwiches don't last long, but most people typically agree that it has something to do with either black magic or mold and spoiled condiments. In reality, we'll never know, because it's not a question worth answering or giving a damn about. Unless you're the military, in which case it's your prime concern. I'm pretty sure we've got a few wars going on or in the works, so developing sandwiches that last a good chunk of the average soldier's service career probably isn't something we should be concerning ourselves with.

So why then spend what I estimate to be trillions of dollars developing these sandwiches that offer no real tactical supremacy? There is a limit to how many sandwiches a soldier can carry, and surely not enough to last them three years. Why would a soldier even be cut off from the supply line for that long anyway? I wondered what the real story was – the story behind the sandwich – because the government was obviously not clueing us in on the actual reasons for this Black Sandwich Project. If I've learned one thing in life, it's that chess is never an easy game to play when a large duck occupies the center of the chessboard. But more importantly, I've learned that if the goal of your organization is to protect this nation, you do that instead of working on food that doesn't rot. That's when I realized I wasn't looking the bigger picture. Like that famous painting of dogs playing poker or the lesser-known painting of dogs getting it on, the bigger picture creates more questions than answers. The nearly immortal sandwich must just be the beginning. Once perfected, there is a long line of offensive and defensive sandwich options for the military to pursue. For you see, being diehard works on multiple levels. First, it means you have difficulty dying, which is the main attribute of the three-year sandwich. Second, it means you kick ass and take names. Finally, it means that nobody dares even try to take the Nakatomi Plaza hostage. Thusly, there is another side to this sandwich-shaped and edible coin: the side that stands for killing like a crazy person.

What I'm about to tell you is probably classified, but I'm a reporter and I'm sworn by blood oath to give you the facts as soon as I imagine them. I present, for your eyes only, the grim future of sandwich warfare.

Tactical Hoagie Baton
While people tend to think that soldiers are trained only in ranged combat, nothing could be further from the truth. Soldiers must also be able to defend themselves and eliminate threats without the aid of ranged weapons. In melee circumstances, the tactical hoagie baton will provide a sturdy and enticing weapon low in calories and high in ass whipping. Utilizing toppings designed to pacify attackers, such as tear-inducing onions, the tactical hoagie baton will serve as a guardian angel in a sea of violence.

Bombwich
These deadly and delicious bombs would be served to enemy leaders and soldiers just before wartime. However, due to massive bowel explosions, they'll never live to see that time. Because these sandwiches can be made in tiny sizes with those little toothpicks in them, they're easy to transport across borders and security checkpoints. When detonated, they send jagged condiment shrapnel flying in every direction, causing massive internal bleeding and organ failure. You will believe a man can die of a taste explosion.

Vomitwich
The Vomitwich is aimed at neutralizing hostile forces by making them violently ill. As you can imagine, it has a wide range of uses outside of the military sector, including crime prevention. By simply serving your attacker a Vomitwich, they'll be rendered sick and unable to continue wronging you. Stores, homes, and individuals will be able to empower themselves because criminals are mentally incapable of turning down free sandwiches. 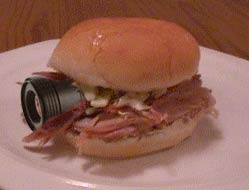 You better watch what you eat, because it's watching you!

Smartwich
The Smartwich is the ultimate in cutting edge technology. Once consumed, the Smartwich generates strategic intestinal maps, including potential trouble areas and ports of entry. It will also tag targets for long-range missile attacks. The only challenge is convincing somebody to eat a sandwich made mostly of metal, wires, and cameras. Let's hope lunchmeat camouflage improves as well.

Invisowich
The problem with most modern sandwiches is that they can be easily detected by radar. The Invisowich is made of special angled bread that evades radar detection. With immunity to radar, the Invisowich can be readily dispatched to combat areas without fear of surface-to-air or air-to-air attacks.

The coming age of sandwich warfare promises a lot for the world, particularly for those of us with a taste for destruction. The current methodologies of war are antiquated and often uneventful, but with a little bread, some meat, and some condiments, things will change for the better. The three-year sandwich is only the beginning; soon all nations will be packing a deadly lunch. I hunger for such a future.