The story of Lazygate ruined a political career and embarrassed a very small part of the nation. It involves a misleading election, credit card fraud, tire-slashing, and a heroic effort to avoid walking home from watching fireworks. Oh yeah, and the heroine of this story is transgendered, but that's not even the point of it. 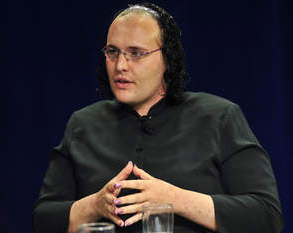 President Obama and various House and Senate candidates were not the only people up for election this November. All across the country, state legislatures were restocking their dusty shelves with the scratch and dent politicians who can't quite make it into national politics.

Stacie was born Barry Laughton Jr. She is New Hampshire's first transgendered legislator. Her election was justifiably heralded as progress by the LGBT community of New Hampshire. But Stacie's story of triumph took an unfortunate detour on Tuesday when a local newspaper reported that, while married and identifying as a man in 2008, Stacie was convicted of felony credit card fraud. She was also accused of sexual assault, arrested for slashing car tires, and was charged with faking an illness to get an ambulance ride. She did not disclose any of these things during her candidacy.

Rocked by the discovery, Stacie went on local TV and announced her resignation. Then she posted on Facebook to reconsider and ask her friends whether or not she should follow through with her resignation. But, by Thursday night, Stacie caved to the pressure and resigned. Before even being sworn into office, New Hampshire lost its first transgendered legislator.

The episode marks the fastest rise and fall of a politician since Herman Cain was briefly liked by Republican primary voters. But there is more to the story. Digging deeper into the events involving Laughton, specifically her ambulance ride incident, paints a portrait of someone who might have been the greatest human being ever elected to hold office.

Allow the detailed account of events from the Laconia Daily Sun to give us a little background:

At the time, Stacie Marie was named Barry Charles Jr. and in 2005, during her first run for public office - the Laconia City Council in 2005 - she listed her occupation as pastry chef but said she was between jobs. During her time in Laconia, she lived primarily in public assistance housing and engaged in a number of small, home-based businesses, including selling vegetables. 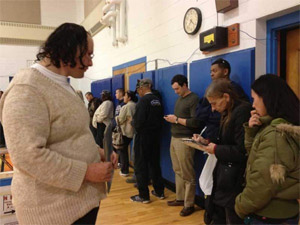 The incident with the ambulance took place on July 5th, 2006. Stacie Marie was doing something millions of Americans enjoy that time of year: watching fireworks on the beach with her beloved wife.

As the fireworks ended, Laughton and her wife, Lisa, realized that they had neglected to bring a car or a bicycle and the fireworks apparently went until after two in the morning. Stuck at the beach, located five miles from their apartment, they were left with no alternative but to call 911 and request a ride.

Police refused to send a police car out to the beach to drive them home from the fireworks. Attempting to very slowly amble back home, Lisa supposedly suffered a fall. In total despair, Laughton dialed 911 again and warned that she was suicidal and they needed two ambulances to take them to the hospital. Events moved swiftly from there.

Both were transported to Lakes Region General Hospital where Laughton told the attending physician initially that he had called the ambulance because he couldn't sleep and suffered from depression.

In the next breath, reports indicate Laughton said, "Honestly Doc, I was at the Weirs fireworks and didn't have a ride home."

Off to a pretty good start. Calling the cops until you threaten suicide and getting transported to the hospital. More of a lateral move than a forward move on that project to get home. But what was Laughton's next plan? The doctor refused to treat the Laughtons and police again refused to provide transportation from the hospital back to their house. Unable to call another ambulance to take them home, police contacted a taxi company and a car was sent out. Finally the night drew to a close.

They called a taxi who took them the short distance from [the hospital] to their home, told the driver they needed to go inside to get the $4 fare, and never returned to the waiting driver - who called the police. 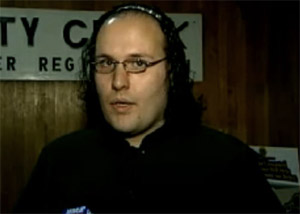 Things continued to deteriorate, but I want to stop for a moment and appreciate the incredible mind that came up with this caper. A self-described pastry chef, apparently without four dollars to her name, left the house for weird, late night fireworks with absolutely no plan for how to get home.

Even Laughton's terrible lack of foresight might have been overcome by that old fail safe of walking. Not for Laughton. Instead of hoofing it home, she considered it a viable alternative to take two ambulances to a hospital. Still refusing to walk, they took a cab called by the police, and then stiffed the driver. The audacity of that part is impressive.

I wonder how that worked out.

Records indicate that two police officers went to their Church Street apartment and pounded on the door until Laughton answered. Laughton said he wouldn't pay the $4 fare because the taxi service has assured them that it would run until 2 a.m. but didn't.

Police said she became "increasingly agitated," finally telling the two officers that Laconia District Court Judge David O. Huot (also elected to serve in the new Legislature the 2012 election as a Laconia Democrat) would "laugh the charges out of court" and there was nothing the city police could do about it.

Initially charged with a felony for her clever ruse, Loughton would later plead guilty to theft for stealing the four dollar taxi ride. No information is available on whether or not Judge O. Hout was laughing when he sent Laughton out of the courtroom.

Four dollars might be the smallest amount of money to ever ruin a politician's career.