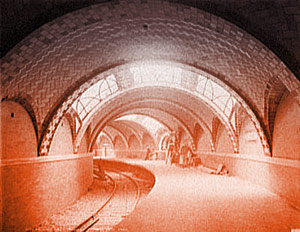 The travelers venture into the depths of the Palace of Wisdom, drawn as much by the awful beating of the City Heart as the singing crowd of Dolorists. The press actually lessens as they traverse tiled tunnels and descend twisting staircases into halls lit by chandeliers. By ones and twos the Dolorists peel off and disappear into alcoves, down ancient civic hatches, and into feeder tunnels threaded with ominous red lights that throb with the pulse of the City Heart.

They descend through half-flooded train stations and pass through galleries of defaced artwork and moldy billboards for Hollywood pictures with titles like "Bare Shoulders" and "The Cigarette Girl Follies." Though each is aware of the peril that may await, the travelers and their guide are unable to shake free from the hypnotic control of the City Heart. The terrible tattoo of the device becomes louder and louder until it seems to shake their bones. The heat of the City Heart's exhalation couples with the ever-downward course to complete the illusion of a descent into hell itself.

"Above us is the black obelisk of Wall Street," DeShaun shouts over the heartbeat and points to a sign that Nils and Beauregard cannot comprehend. "City Heart beats directly beneath the trading gallery. Or so they say."

As the travelers approach their destination, each seeks comfort where it can be found. For Beauregard it is in the advertisement for the beautiful aviatrix Lady Elise and her Aerodrama. Nils holds the note he has scribbled to his beloved and thinks of the shape of her body, though he has never seen it himself. DeShaun closes his eyes and pictures himself transformed into a panther. He slips out of his stifling turtleneck and corduroy slacks. His body is pure black and rippling with powerful muscles. He is the apex predator.

"Here it is," DeShaun announces, though such an announcement has been rendered unnecessary by the breathtaking sight of the City Heart.

The chamber is spherical and seems ten stories high. The curving walls are covered in white station tiles and lit in rings of arc lights that cast moving shadows amid the billowing steam. Numerous gantries and walkways extend from the catwalks around the edges of the room to the roughly spherical shape of the City Heart. The device is easily ten meters across at its fullest swell. It grows as if inhaling deeply and then contracts suddenly around countless protruding pistons. At the moment of this contraction there is a deafening thud followed by the hiss of steam escaping from numerous linkages and hoses. 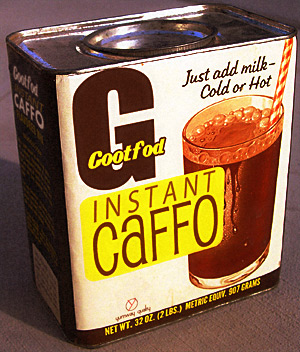 Dolorists wearing steam suits hang at varying heights from an overhead gantry. Some seem to be adjusting gauges and valves; some hang around a great rusty bucket full of paper and coal and wood. They shovel debris from the bucket into the yawning entrance of an immense furnace. Additional buckets and labor crews hang above, waiting in line to be lowered to feed the furnace of the City Heart.

It is the largest combustion engine Nils has ever seen, easily dwarfing the 44-piston diesel monsters that power the Bakkenlinder luxury submarines operating in the North Sea. If it weren't churning and spraying out gouts of steam Beauregard might almost mistake its elaborate mechanisms for the graceful engineering of Her Majesty's orrery at Windsor's Chemurgic Cathedral.

An armed gang has encircled the gawping trio, more Dolorists in silvery steam suits. Their breather masks are pushed up on their heads and their faces are caked in coal dust. A few hold actual weapons: swords, knives, and broom-handle pistols. Most of them are armed with the shovels and picks they presumably use in their labors.

These Dolorists are stoic, emotionless. They continuously mutter a similar litany of sorrows, but their voices are unheard amid the racket of the City Heart. A well-dressed man pushes through the cordon of Dolorists. Nils and Beauregard recognize him at once.

Donald Rickenbacker is wearing the same coachman's hat as before, but is more sharply dressed in black frock coat with a subtle fleur-de-lis patter, vermillion vest, silk tie, and trousers so darkly red as to be the color of dried blood. He greets Nils and Beauregard almost fondly and tips his hat to DeShaun.

"Come, come," he says with excitement. "Let me take you up to the top. You can see what I have done with her."

The Dolorist workmen part to make room for Rickenbacker and the travelers. A harrowing journey up an accordion elevator deposits the men on a circular platform just above the City Heart. The metal grating rings with their footsteps as they approach stairs leading down to the City Heart itself. As they descend they see at once what Rickenbacker and the Dolorists have done. The woman of tin has been fused - by both bolts and welding - into the body of the City Heart.

The fire deep within the heart seems to burn in her previously lifeless eyes. Her legs are gone as if she has melted into the spherical body of the heart. The disparity in proportions between her upper body and this immense lower body makes her look like nothing so much as a tick after gorging on a blood meal. She turns her head and regards Rickenbacker with no apparent emotion. The flywheels and gears inside her are turning so quickly that a steady shower of sparks is pouring from the depths of her feminine chest.

"She is now in control of the City Heart," Rickenbacker explains. "The Dolorists practically worship her like a god. She has no emotions and no pain and now that she's all hooked into this...well...she's queen of the underworld."

Beauregard asks Rickenbacker what he thinks about the arrangement.

"They paid me two thousand dollars, cash on the barrelhead," Rickenbacker says and spits off the side of the heart.

DeShaun wonders if they are free to go. Rickenbacker laughs.

"Soon," he says. "First, I need to ask you a favor. It is so fortunate that my forlorn friends happened upon you. The Dolorists want the woman of tin to remember everything. Not just a few simple actions or some funny answers to questions like I can put on her gearing. They want real memory. Advanced transistor technology."

Electric computers. Video machines. Simple devices of this sort are used in the Sensorama machines and the new driverless automobiles being made in the Orient. More advanced versions are kept by great armies, kings, and the fabulously wealthy. These advanced devices can determine the outcome of a war or answer any reasonable question posed to them by a reasonable man.

"There is an electric computer expert, Dr. Wildbaum. He is very old, but he helped found World Computer Devices, the famous company which everyone knows about."

Nils, Beauregard, and DeShaun nod in unison, for they know about World Computer Devices.

"He is not Chairman Mal, but he was instrumental in developing the most advanced electric computer. You can find him in New York at a very exclusive club. I will write down the name and you will go and see him and get the parts he tells you that you will need. You must build a level 10 machine. Remember that. Level 10. You will do this for me, gentlemen."

Someone asks why they would do that.

"Why, I have your hearts," Rickenbacker laughs. 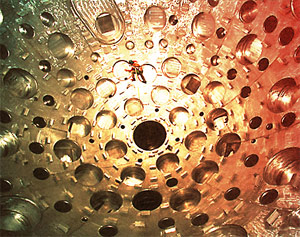 Nils, Beauregard, and DeShaun also laugh. Their laughter dies when Dolorists take hold of their arms and hold them at their sides. With practiced ease, Rickenbacker seizes each man's heart from his chest and drops the bleeding organ into a jar. When he is finished he seals the lid and places the jar in a box which he locks with a key worn around his neck.

"They will last a week in there," he tells the travelers. "Then they, and you, will perish. Make the woman of tin whole and you will have your hearts back, alive and well. Then you may go on your merry way."

The woman of tin looks at the panting men and their suddenly red-stained shirts. Inner fire dances in her eyes.

"I really am sorry about all this," Rickenbacker says and claps Nils on the shoulder. "If there were any other way..."

"Ah, well," he clucks in disappointment. "Send them back to Harlem. Pipe 13."

Nils, Beauregard, and DeShaun are dragged by the Dolorist workers to a large iron pipe with an open hatch. Water can be seen rushing along horizontally at great velocity. Then it can be experienced rushing thusly by Nils, Beauregard, and DeShaun as they are dumped into the pipe and launched, at the aforementioned great velocity, back to Dutch Harlem.

Each man emerges with a gasp of air, pouring out with the rushing water onto the pavement. A few onlookers murmur in surprise at the sudden appearance of three strangers in the street. The trio have been hydro-pneumatically returned to Dutch Harlem and they are in sight of the trusty Alpus.