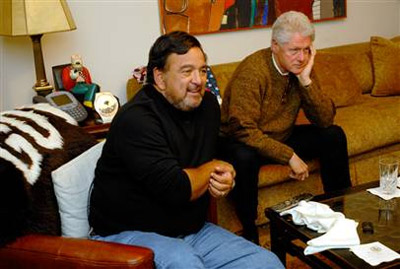 New Mexico Governor Bill Richardson is the excellently ethnic endomorph who ducked out of the presidential race shortly before an embarrassing defeat in his home state. After weeks of soul-searching, beard-growing, and awkward Super Bowl watching, Richardson endorsed Barack Obama. This earned him the title of Judas from Clinton loyalist and gumbo-steeped reptilian James Carville, so the guy can't be all bad.

Pros: Richardson is a likable Latino so non-scary he could even appeal to xenophobic border minefield advocates. His presence also convinces Latino voters that they live in a country where one of them is allowed to gorge on sopes in the Vice Presidential residence.

Cons: Has fucked up every job he's ever held, including being a Clinton supporter. Once a traitor, always a traitor, or so they say. There's certainly a reason Benedict Arnold was never elected Vice King of England. 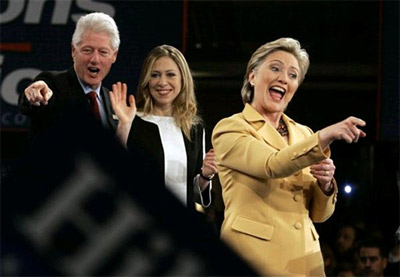 If the abyss gazed back at Obama during the fight for the nomination then he might have picked up just enough yawning soullessness to throw a lasso around Clinton and bring her onto his ticket. The joke is on him: no lassoing needed. He'll be lucky if she's not the one trying to ride on his back into the convention come Denver, hooting and hollering and daintily sipping shots of Crown Royal.

Pros: The obvious upside is that Obama gets to weld the tender cyst of Hillary's outrage-fueled biddies to the underbelly of the hopeasaurus.

Cons: The Clintons are likely to spread like an eye-watering gas leak over Washington, bringing the sulfurous stench of despair to anything Obama attempts. Even worse, if Obama's approval numbers seem low enough in 2010 then VP Clinton will probably start gathering her knitters for an "I Told You So" primary challenge. Keep your friends close and your enemies closer, unless your enemy wants to eat you.

There are many other possible candidates for Obama, from the so-nice-it's-a-little-creepy Missouri Senator Claire McCaskill to the mild-mannered Clinton supporter and retired general Wesley Clark. There's also indie favorite Michael Bloomberg, the New York billionaire who could surely help shatter the elitist image glued to Obama. Whoever Obama ultimately chooses, he had better hope they don't enjoy milk in their coffee.