Kathy also popped up on the Mike Huckabee Show last year and her neck was fairly normal in length. Ignoring the anti-abortion wiener doing a lead-in, Kathy Ireland talked to Mike about her conversion from pro-choice to pro-life and her use of science and Bibles to determine things about embryos.

Did you know we have fingerprints from the moment of conception? Thanks, Kathy Ireland.

Heading down the prolife rabbit hole is a sure way to bake your synapses, but Kathy's psychosis is so profound it has manifested itself physically.

The best I can find is a clip from January of this year. It appears to be an Israeli news show covering a visit to Israel by Kathy Ireland.

"Thank you so much for defending Israel" Kathy tells an Israel soldier. She decries the media's hostility to Israel and entreats people watching to visit Israel and "experience the military." Without getting into violations of treaties involving burn agents, let's just say asking for people to experience the Israeli military is an interesting sentiment. 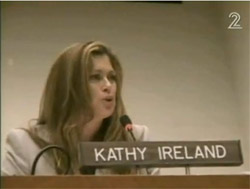 No one had the heart to tell her the country is "just Ireland."I was pretty sure I was headed in the right direction at this point. Then I found the link that put all the pieces together. It came from the Jerusalem Post, Israelis best-selling English newspaper. The title of the article is, "Born-again Zionist supermodel"

"It's a lifelong journey, but what's very clear to me is God's love of Israel and His chosen people. They are the apple of His eyes, His chosen people, His bride, His beloved, His firstborn etched on the palms of his hands. The Abrahamic covenant is unconditional and it is forever. As a Christian, it is a privilege to be of service whenever one can."

A born-again Christian talking about covenants and Israel can mean only one thing: End Times believer. Kathy Ireland has been chugging the Omega Code and her extreme support for Israel is wrapped up in crazy Bible prophesies about Jews repenting and being lifted to heaven. These are the sorts of people who support wars in the Middle East because they might hasten the return of Christ to earth. This is the level of crazy that could make your neck spontaneously grow three inches. This is the crazy that turns a simple thong-wearing pro-choice hussy into an ardent supporter of Israel with the mannerisms of an industrial robot.

Who let her host an Oscar pre-show, well, that's an entirely different question.

I searched high and low for footage of this event with Kathy Ireland. She is so much more of a spectacle in motion, but I came away with nothing but some viruses trying to infect my computer. If you have or find video of Kathy Ireland from the event then please email me a link.