The Bargain Book Bin: A Random Chapter from a Book You Haven't Read

Eventually they returned to the small village of Dwelling that had been their last place of shelter before they had departed into the foreboding mountains along with some villagers who had been heading out for a weekend backpacking trip.

The locals gathered and cheered as they entered the main square. A Girl ran up to Tim and threw her arms around him.

"You have returned safely, oh my love," said A Girl. "Now we may get married."

"Hooray!" cried Anton, waving his wand in celebration. A bolt of lighting shot out from its tip and killed the man standing next to him. "Oops," he said.

Immediate preparations were made for the wedding celebrations. Much food was gathered from the forest and brought to Dora, the Second Best Chef in the Village, who would be preparing the wedding feast. Tracker, who also was highly skilled with a sewing machine, helped A Girl make alterations to her wedding dress. The days passed in a happy blur, except for the family of the guy that Anton had killed, but they politely kept their mourning discreet so as not to dim the joy of the event. 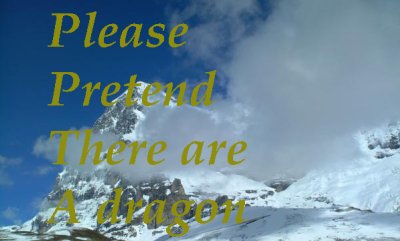 Finally the special day came. Tim was dressed all in white, and Kit, the Flying Boy Archer, had shown him a cool new way to style his hair using various magic spells and potions. People from all over the Kingdom who had helped them on their journey had arrived at the village for the wedding.

Theo, the Old Man Who Had Told Tim About His Destiny and Who Also Had Trouble Controlling Saliva Output, came up to Tim and held his arm tightly.

"You have done as the Gods willed you to do," said Theo. "You have discovered your life's purpose."

"Thanks, but you just drooled all over my shirt sleeve," said Tim.

"That's fine," said Tim, dabbing at his arm and excusing himself. He greeted Peter, a Seller of Common Birds and Boring Artifacts, who had brought him a wedding gift of a pigeon and a small, undecorated clay mug.

The crowd clapped as Tim climbed the alter to where A Girl was waiting. Her head was crowned with autumn leaves, and her skin was radiant. They said their vows together, and then he drew her close to him and they began to kiss passionately. The crowd erupted in wild cheers. Even the Gods seemed to beam down at them through the clear glass window of the sky.

"This is awesome," thought Tim. "This hot chick is totally into me. I think I could even touch her boobs and she wouldn't mind." She didn't mind.

If you enjoyed this article, why not check out the other installments in the Bargain Book Bin series:

The internet: Where you read about books.