Subj: YOUR SISTER IS GETTING MARRIED TO "GREG" 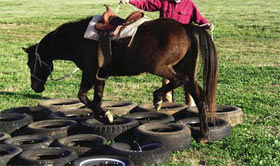 In the year 1993 I hosted the 1993 FAT KID PRO-AM CHALLENGE in our neighborhood. The previous year it was just called the FAT KID CHALLENGE but this year I decided to make it a PRO AM so i could be the pro from time to time and do parts of the events for the fat kids when i get frustrated that they cant climb over things, run fast enough, etc. because you better believe it that i'm doing this with my free time so its my way or no way. Only 2 or 3 times did i have to invoke my pro power and when it happened i had a little stereo and I hit play for a split second so everyone could hear a lightning strike sound and then I went running out and helped a fat kid down a ramp or over a pile of tires or whatever. I stopped doing the stereo thing because on the last time I forgot to hit stop and the rest of the halloween sounds kept playing while I was running around the yard pushing the fat kids through the obstacle course. This year one of the fattest and slowest kids was Greg from up the street and he was the same age as my daughter. I think this is when they met and I will remind them of this at their terrible wedding. Also it wasn't even called the Fat Kid Contest or anything and the word fat kid wasnt in the title but I will say it was.
Greg proposed marriage to my daughter last weekend and wrote me a letter in which he said a lot of real horse hockey and enclosed a picture of his round ghastly face that looks like a mushy human pumpkin someone dropped on the floor. his face actually is gross to me and one time when i was at home alone i was watching the movie channels and Heavyweights came on and the biggest kid on that looked like Greg and i laughed so hard that i cried and i decided to write myself a note to call Greg's parents the next morning and apologize for his face but I never did that but I do still have the post-it note around somewhere and whenever I see it I laugh a little again 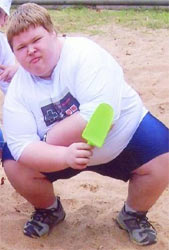 In the year 1999 I held Greg by the ankles while he walked around the lawn on his hands and tried to escape my grasp. It did not work even though he was 15 years old. He got mad because I said he had a meaty face so he took a swing at me and i dodged it and ducked then grabbed his legs and walked him around the lawn while he tried to grab for my ankles but couldn't. for one thing I dont think Greg has any depth perception or any idea about the rule of law. some days i think greg was a kid who got SIDS but didnt die.
Gregs dumb dad was in my class and so I saw him at all the high school reunions that I was invited to. we didnt get along well suffice it to say. Gregs dad was a police man who was put on administrative leave a few years ago and nobody in the town ever found out why but I was connected on the grape vine and I knew all about it. I wont go into details but around the watercooler at the police station he was known as The Disgraced Homo Cop and lets leave it at that. To this day if you go down to the police station and say "How About That Disgraced Homo Cop" all the other cops will go "Oh Yeah, Gregs Dad" take it from me but dont tell them where you got the hot tip from about the homocop.
From now until the wedding day i will keep an eye on my post office box for a letter that looks like this. no other letters will be accepted.
Dear Mom and Dad. My dumb boyfriend Greg died and I threw his engagement ring into a fire pit and a screaming meat-faced ghost flew out of it. Goodby. -The Daughter
SINCERELY..........................DAD

THE SMARTEST MAN IN TOWN