What is in Mitt's Taxes? 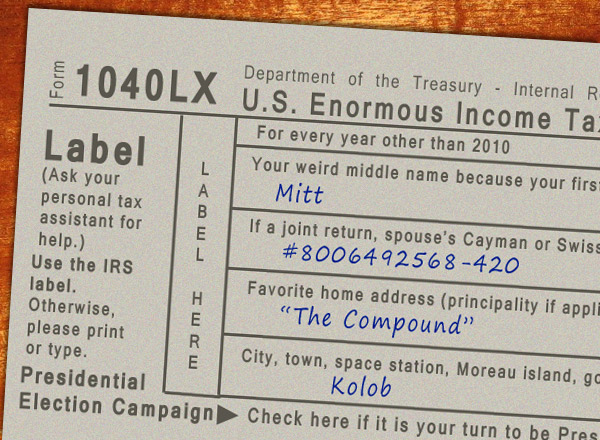 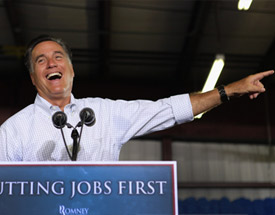 GOP Presidential candidate Mitt Romney has spent the last two weeks insisting he will only release one year's worth of taxes, fueling speculation that his previous years may include incriminating information. Ann Romney has insisted the Romneys have given all "you people need to know" and until the Romneys reveal more, people are left to speculate. Until now. We have Romney's taxes for the past 17 years and have begun the process of sifting them for interesting factoids.

Between 2007-2009 the Romneys' income was taxed at an average rate of 11%. In 2006 it was 8%. In 2004 it fell as low as 1% and dipped into negative territory when Mitt deferred an entire year's income in 2003, receiving millions in stock from Bain-owned companies, converted the stock into IOU letters, filtered them through a charitable trust and kept them in a chest sunk to the bottom of a Bavarian moat. 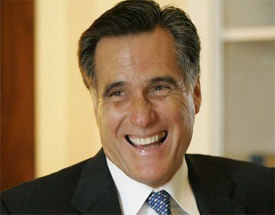 The Romneys use a diverse collection of accounts, corporations, trusts and investments to shield their income from taxes. No thought seems given to appearances of impropriety. For example, in 1997 the Romneys socked away almost half of their money in something called the Khmer First National Bank of Skull Orchard, located in Cambodia. The rest of their income was sucked up into various Swiss, Cayman, Burmese, Chinese, Iranian and Somali banks and investments.

Nothing seems to roil their portfolio. In 2002 the Romneys maintained an undisclosed amount in an Antarctic bank operated by a Norwegian science expedition. In 2003 those funds were passed directly to the bank account of "T. Thing."

Questionable deductions of high-ticket items and expenses reflect the extravagant lifestyle the Romneys considered part of the cost of doing business.

The Romneys made the majority of their charitable contributions to the Church of Latter Day Saints and affiliated programs, but they did branch out when it benefitted their tax position.

The question remains, "Did the Romneys do anything illegal?" The answer is, "Gosh, of course not. We did exactly what the law required and you people should know that, but all of this is a distraction from what really matters. Barack Obama's college records."

Hopefully that clears everything up for you.

Zack Parsons is the author of the novel Liminal States and has his own guest column in Politico under the pen name Joe Scarborough.