The real conflict in the novel begins when the main antagonist, Stephen Eremyie, leader of the vampire cult, attempts to abduct Joy's daughter Lily. Here is an excerpt from that section:

"Lily, come with us. We can fly. We're beautiful. We have powers the likes of which your mother has never shared with you. We take what we want. We live life to the fullest and express our individuality together, as a group," Stephen cooed in his cold voice. "Your mother's magic is fool's magic, for dolts and children. Only stupid babies and uncool nerds want to have anything to do with what she's created. You're not a foolish, uncool baby, are you?"

Lily watched the young man float whimsically outside her window. He was handsome and dressed nicely. Lily seemed to pause in consideration. Joy held her close and spoke to her, though her gaze never left Stephen's eyes.

"Lily," her mother began, "listen, this is your mother talking to you. You can't trust what these vampires are saying. On the outside they might seem cool and independent and interesting, even beautiful. But inside they are as empty as their writings. They have no soul, no heart and no brains. Only misguided, insipid youths put any stock in what they have to say. People who are so disconnected from their own reality that they think this vampire farce will offer them some kind of escapist solace."

"Lies!" Stephen screeched, baring his perfect, albeit fanged, teeth. "Your mother lies. She wants to keep you a child, keep you living with 'alchemical magic.' Some day you have to stop doing what your parents say and the first step is to accept vampirism."

"I'm not lying!" Joy screeched, "You are the lie. Your whole existence is predicated on ignorant people's misconception of an age-old myth. You think you can romanticize violence, infantilize sexuality and mock writing itself with your texts? Your kind will be gone without any trace in no time. My writings, the work I've done for magic, will prevail in society forever. You are a flash in the pan. You are a fad."

Lily looked back and forth between them, her undeveloped mind struggling to weigh the decision before her.

"Insipid?" Stephen hissed, "you created your so called 'magic' to entertain a child. Do you really believe the rubbish you spout about your own work? Be here forever? An entire generation is already growing up reading our magical writings instead of yours. You sentimentalize childhood and take the fantastic away from fantasy, integrating it into our world as if there isn't a blatant contradiction between the two, causing a dangerous dissonance in the mind of any child desperate enough to read it. You emasculate boys and rob girls of their femininity. Your ideas are so simple and your champions so predictable it's a wonder that your magic ever became known across the world. Of course that was probably due only to your severe concern with popularity and fortune for yourself. Don't disparage our community or our texts, when you would whore your magic out to anybody for a schilling!"

Joy's eyes narrowed. Stephen had crossed the line. The time had come to pull her trump card. "You're very passionate about your vampirism, Stephen Eremyie, but from what I hear you don't even believe in it yourself!" Joy paused dramatically and continued, "They say you believe in magic underwear and a magician who put a stone in a hat to talk to spirits!"

Stephen lurched backward as if stabbed in the heart with a wooden stake. "How...dare...you..." he said and lunged at the window viciously. 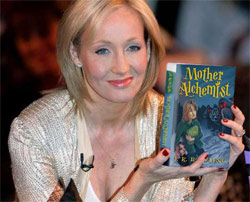 The conflict between the vampires and the alchemists is the crux of the novel. Rowling has the reader choosing sides and going back and forth between the arguments. But the reader, like young Lily, must ultimately choose a side and defend it against the other. Rowling explains it thus:

"So like, there are two kinds of people, right? There's vampires who fink they're so great, even though they're rubbish, and there's the alchemists. They both ride in lorries, they both take the lift, they both celebrate Boxing Day, but deep down where it matters, they are very different. It's a bit weird that some people choose vampires, that they let their kids choose vampires, when there's such an obviously superior alternative. But some people are just plonkers, ain't they?"

In conclusion, fans of Harry Potter will find the book satisfactory, if a little different. Readers who are new to Rowling will likely enjoy the book if they are a fan of any easily digestible children's literature or mass-produced genre fantasy. The characters are genre staples and thus easily relatable: the wise old man, the proud and headstrong boy, the overbearing and bitter mother, unwilling to share the public with an equally worthwhile competitor due to deep seated insecurities and an inflated sense of self-importance brought about by fortuitous popular acceptance of her earlier works - characters old as stories themselves. But in Rowling's world, these characters come alive with the tried and true method of having them act exactly as one might expect, until a crucial twist at which point they examine their motives, question their allegiances and ultimately come to see that good must conquer evil after all. Let's give the author the final word:

"What it comes down to is originality, innit? Any wally with a cottage and a fountain pen can sit down and write a book about something like vampires. I seen a vampire on me daughter's morning cartoons. But alchemical magic? It doesn't even exist, like in the world, does it? But I thought of it, right, and like, I could keep it inside me block, just finking about it. Instead I'm gonna share it with the world in a hardcover collectors' edition for only twenty pound sterling a copy.

Mother Alchemist cover artwork by Andrew O. Brendle writes for Barnes and Noble's Unabashedly Bookish Book Blog and you can follow him on twitter at http://twitter.com/brendlewhat.