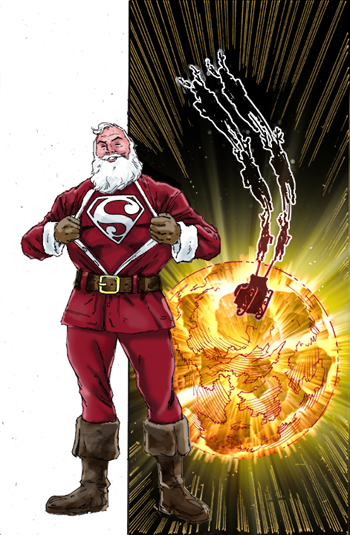 Despite failing, Santa greatly enjoyed doing something selfless again. He had been reborn and given new purpose. He declined The Disciples' offer to return to the super team. Instead he would stay at the North Pole and dedicate his time to giving out presents to the rest of the world on his bday, rather than receiving presents himself. And he would do it every year forever.

He named the holiday Xmas, in honor of his extinct home world, Planet X.

And the elves never revolted because Santa was so much stronger than them. Plus they liked being slaves, like in Harry Potter.

Like Worm Miller's questionable rendition of the history of Xmas? Well, the historical dubiousness continues in his brand new super-sexy book! What better way to spend those Amazon gift cards you'll get over the holidays? Act now and receive this special offer: Buy two copies and you'll receive two copies in the mail!

Thanks to Sean McArdle and Dexter Wee for the awesome illustrations!