My Name is John Bolton and I Approve This NOTHING 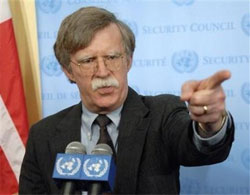 You might have heard that I'm considering a run for President. Allow me to address these rumors.

You bet your darn butt I am! This country is in a mudhole of trouble and it seems like no matter which one of these pantywaists gets voted in they just stomp us deeper. I say to hell with those sons of whores. This country used to be great. We used to make things. Clocks and bicycles. That sort of thing. Iron bars. Corsets. Now all we make is submarine sandwiches and computer games for fat kids.

I've had enough of it! I had enough internationalist crap to choke a mule when I was appointed to the United Nations. Loads in congress never backed me up. Shows you what they know. Burkina Faso is coming back, just you wait, when we least expect it. When we lower our defenses. And that's the least of our problems. In this 21st century world of globes and bleeding-heart bloggers on telephone computers we face a new hellish world where other powers are emerging to try to thwart our business interests and the spread of freedom. 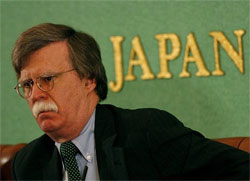 My platform is simple. Do what's right for America, always. Never compromise, never take "no" for an answer.

I'm giving up a very full life to do this. I hope you realize that. Gretch and the minipins are going to have to take a backseat. We're gonna have to skip the Dells this year. No lumberjack breakfast. No more hobby trains and scale model conventions. I'm taking off my engineer's cap autographed by Denny "Deuce" Whittaker, the last engineer of a coal-fired steam locomotive used for non-amusement purposes. Denny died in 1987 so this hat is one-of-a-kind. I'll be clearing out over 75 scale miles of track and ending the 3:10 service to the volcano to make room for a screen press. I'm going Shepard Fairey on this mother.

What do I bring to the table? Backbone plus balls plus a combined 200 years of experience telling chumps from forgotten lands how high to jump.

Shit I will get done in my first term: 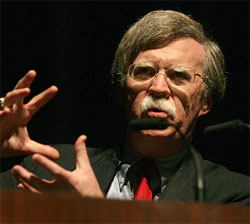 China. No more BS, ching chong. We're through messing around. Time to dance or get dumped.

North Korea. Bombed until those Mini-Maoists will be lucky to refine pebbles into lunch.

Russia. Back on the table. I've peered into Putin's soul via a large jpeg image and this is one hombre who has schemes. Upgrade the nukes, put up nuke shields, gas up the jets and get the bombers back in 1957 rotations.

Iraq, Afghanistan, Pakistan, Yemen, Syria, Venezuela, Cuba, etc. Bring out the B-52s. The only reason Rolling Thunder didn't work is because Nixon didn't sack up and see it through. 100 days of bunker busters carpeting Mogadishu or Islamabad is going to send the clear message to these scumbags to sort their oatmeal out or get handled for good. Click, click, click, clickity-click on the Geiger counter.

The economy. Stimulate the military with more tanks and jets. We're through with these talibeentheres. We've got global Tom Clancy stuff to do now. And I mean good Tom Clancy before he started writing books for video games for fat kids. Hey, fat adults read too, crap for brains. Build some spooky computerized junk nobody has ever heard of like a drilling tank that launches helicopters or something with a centipede body. Those things give me the willies. Sometimes in bed my mustache tickles my lip and I think it's a centipede. Yikes. Imagine that, only it's twenty foot long, made out of USA iron and tearing open your door and shooting gas bombs into your cellar. What now, Osama??

Social bullcrap. Who cares? What do you want me to run a needle exchange out of a gay marriage church? This is war, people. Sacrifice. No more social crap. You're gonna have to bootstrap it until I sort this mess out.

My message to you, the American people reading this, is that it's time to dig in. Trenches down main street, sandbags on the roof of every hardened building. We're not at war here, we're at apocalypse. There's geopolitical Bible times shit going down if you know how to look for it. 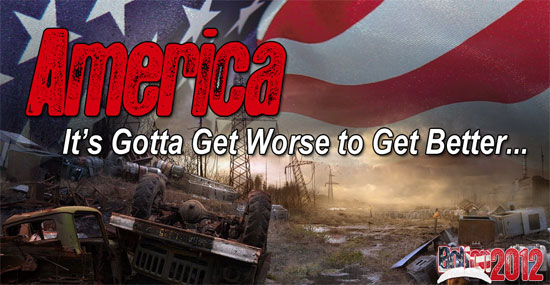 I will be joined in my campaign to set America straight by my longtime friend Keef Clancy Dentists, better known as the Tom Clancy of the Midwest. And I mean the Tom Clancy pre-HAWX 2 of the Midwest. His Kremlin, USA quadrilogy ranks right up there with Ayn Rand and Sun Tzu. He has a combined 120 years experience in unconstitutional law and he comes directly from the Pernicious Policy Institute of Hells, Indiana. He authored the the 1994 Solutions Letter to Newt Gingrich advocating the use of Titan II missiles on Somalia. Keef has a fine mind and mustache that will compliment my own. 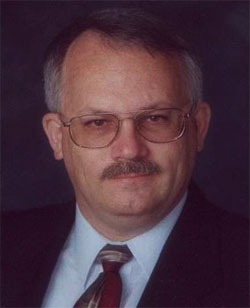 I would like to take a moment to thank in advance whoever sets up the draft John Bolton website. I figure we can do a Fred Thompson on this one, drop some stories in politico, maybe get Liz Cheney to mention me on Meet the Press. Before you know it, boom, I'm Keith's Worst Person in the World three days a week.

What do you say, crap for brains? Are you in on this?

Thanks and God Bless the United states of America