The Glamorous Life of a Secret Agent

It's four in the afternoon and there's hardly anyone in the bar. I like it that way.

"Just a Bud is fine," I say. I down it as quickly as possible and signal for another.

I notice a woman a few stools down is smiling at me. I know the type. She used to be beautiful, but now she has a little bald patch on the top of her head, and bulges of fat bubbling up over her jeans, and a c-section scar hidden under her shirt like buried treasure. This is what Countess Pussy becomes while Mr. Dashing Secret Agent is busy turning into me.

I figure we deserve each other, and I get ready to go in for the kill, but my watch phone starts ringing. It plays that song about lady lumps or whatever it is because my nephew changed the ringing sound to that and won't tell me how to change it back. If only that damn kid knew that I've killed at least a thousand well-trained guards with a single deadly karate chop while they stood around talking in indefinable accents. Then maybe he'd stop hiding my car keys.

I answer my watch.

"Hey, I think they actually have a case for you," says my contact.

"Quit joking around, I'm busy," I say. The woman is still watching me, but if I take too long she'll probably start throwing herself at the bartender or something.

"I'm serious. Meet me at my apartment." He hangs up.

I finish the second Bud and leave. This had better be good.

My contact is icing his back in front of the TV, which is playing a repeat of Jeopardy.

"Yeah," he says, "and he'll only talk to you apparently." 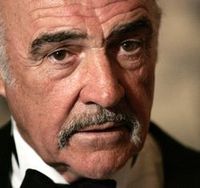 Doctor Reginald Perturbia was my oldest enemy. I had spent years stopping his nefarious plots, like sneaking genetically modified apes into Wall Street to drive up technology shares, and using a satellite to drill a giant hole outside the White House door so the president would fall in and get hurt. Then, after all of our battles, he had given up the mad genius game and gone into optometry. Made pretty good money too, from what I've heard.

Now, after all this time, he had just sent out a press release announcing that he has a plan to rival the most deadly of his old ideas, and requesting me by name to stop it. I haven't felt this excited in years.

One of my favorite parts of being a secret agent used to be all the toys we could play with. Lamps that were actually automatic safecrackers. Shoes that played music to warn you of danger. Suits that could think. If I had to pick one thing I really miss, it would be all that stuff.

Of course, they don't waste agency budget on me anymore. I haven't received an official gadget in years. I've tried to make some of my own, but I just don't have the brain for it. Here are the best I've come up with:

I throw them all into a briefcase, put the case into the trunk of my Saturn, and drive over to Dr. Perturbia's house. Turns out he only lives a few blocks away. Small world.