Ahmed: Oh, he was so good in The Aviator. He should have gotten the Oscar award triumph.

Sharmarke: Is he still coupling with Bar Refaeli? Joyous breasts with her too!

Ahmed: Ew. She is Israeli, my friend.

Sharmarke: There is nothing Israeli about those milk-sacks!

Sharmarke and Ahmed laugh and then high-five each other.

SA: I gotta say, it is starting to sound like you are mostly concerned with the celebrity attention Haiti has received.

Sharmarke: Yeah, fuck that man. I viewed Wild Hogs on the airplane. Talk about shitty. Wild Hogs is the Somalia of movie comedies.

Ahmed: I have not viewed that particular film. But our poor humble country has enough woes already, we are not needing the Scientologists over here giving magic backrubs. Keep your Madonna too. Somali is proud of our little ones. We are not needing her trying to adopt them.

Sharmarke: I would not be minding if Ms. Angelina Jolie adopted my little one. And by "little one" I am meaning my penis member.

Ahmed: (laughing hysterically) I am not believing you just said that!

Sharmarke: (laughing) No printing that one! (stops laughing, addresses me) Under penalty of death.

SA: Right. So, hypothetically, say God grants your request. How would you like events to unfold?

Ahmed: Oh. Well, I am wishing we could whisper by with no Somali deaths, but I do not think you Westerners will be giving as big of a shit then. Chile just got the earthquake, but very few dead. And do you see Ms. Angelina Jolie down in Chile? No. So if Allah smiles, maybe one hundred thousand will be perishing. Sinners and Christians, of course. Maybe some Shi'as. Many important landmarks fall down. The more historic the better. It would please me if we could show up those snotty Haitians.

Sharmarke: We do much praying for this.

SA: Okay. I thank you both for giving us this time to talk. As a closing question, if God were sitting here right now, what would you say?

Ahmed: My humble daughter's birthday is coming up, and it would be wonderful if the earthquake could happen that day. She would be hopping up and down with excitement. She is very much wanting to meet Mr. George Clooney. My family has watched The Perfect Storm dozens of times!

Sharmarke: You know who has joyous breasts? You see Ms. Selma Hayek on the 30 Rock? The Prophet's beard! Her! I wish for Allah to deliver us her!

SA: Well, I guess good luck with your endeavors.

Ahmed: Great thanks being to you. We look forward to all of you giving a shit about us very soon! Many many Westerners read your publication, correct? 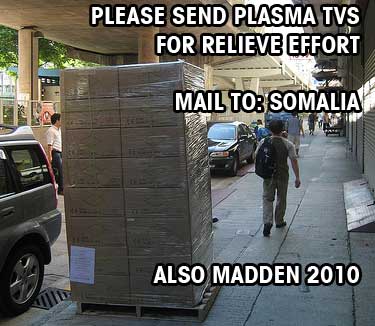