Superman is a Tool

Dave and Gary pause a moment, then laugh uncontrollably.

GARY: Hmm, true. It's like when my girlfriend thinks I'm jerking off in the den, but I'm actually out fighting crime. Did you guys know I'm Batman?

DAVE: Yeah, that's why I'm always late for work. (points to self) Aquaman. Had to fight some dolphins on my way over here.

DAVE: Oh, sorry, did you read about that in a comic book during one of your pussy shit breaks?

SUPERMAN: F you, guys! Guess what? I am Superman. 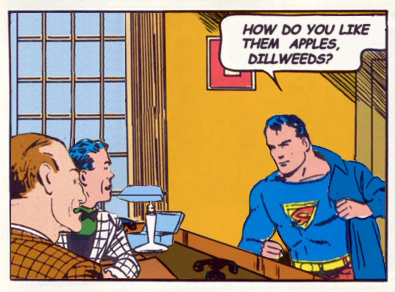 Superman takes off his glasses and pulls open his coat, revealing the Superman costume underneath. Then just to top things off, he uses his heat vision to explode Gary's coffee mug.

GARY: Holy shit! You are Superman!

DAVE: I can't believe ... you just revealed that ... to us? Oh! Oh god! What if Lex Luthor finds out we know and tries to, like, make us reveal your identity?!

GARY: Fuck! He's always doing shit like that! Clark, why the hell did you tell us you were Superman?!

SUPERMAN: What? Cause - cause you assholes were making fun of me!

GARY: You're Superman! What do you care what we think? We're not even friends.

DAVE: I didn't want to know this shit, Clark!

SUPERMAN: Well, maybe you should be nicer to co-workers then! Don't you remember that video Mr. White made us watch about office harassment? You're trying to lower my "emotional value." You're the real terrorists!

DAVE: You're really insecure for a guy who is indestructible, you know that?

SUPERMAN: My entire planet was destroyed when I was a baby, okay? You drink too much at office parties, Dave!

SUPERMAN: Well I am Superman!

DAVE: That was my point.

GARY: If Luthor or one of your zillion other foes captures me, I'm giving up your secret in a heartbeat.

SUPERMAN: You better not! Or I swear ...

DAVE: Hey man, it's cool. It's cool. No one is telling anyone anything. Let's all be cool.

There is an awkward moment of silence. Then ...

SUPERMAN: I need to go to the bathroom.

GARY: Is there a crime happening somewhere?

SUPERMAN: No, I just need to take a dump.

Slowly they all start laughing. Then tension is released.

SUPERMAN: You know what? You guys aren't so bad.

GARY: Hey, I think it might actually be cool to be friends with Superman.

They all smile as Superman exits the room.

Thanks to Ian at Fused Muse for creating the images that made a legend come to life!