Chauffeur Cap Guy vanishes just as I approach, leaving behind a manila envelope on the corkboard. My stomach turns as I turn the envelope over and the missing cop's badge falls out. There's a bullet hole in it, confirming my worst fear: These guys have no respect for private property. God only knows what they did to the poor guy's wallet. 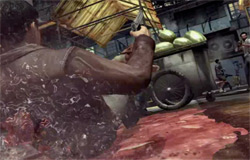 A new team of bad guys swarm the market with guns drawn. There are hardly any signs overhead, so it looks like I'll have to do this the old fashioned way. I slide on my ass for about thirty feet on a tract of watermelon goop and come to rest against a watermelon cart, kicking the owner in the chest to get him out of the line of fire and to avenge my pants, which have now been completely ruined.

The firefight that ensues is long and intense. Bad guys keep coming from every doorway imaginable, but I manage to stay alive by thinking quick, scooting my ass back and forth on a counter like an idiot the entire time. I do this primarily to make myself a moving (and therefore harder to hit) target, but the tactic has the added benefit of amusing me. Long after I've dispensed of the last enemy, I continue this stationary slalom and clap excitedly.

When I've had my share of fun, I get up and head into the nearby (what else?) alley, where Chauffeur Cap Guy and three of his buddies are waiting for me with guns drawn. Looks like I'm in the middle of an old-fashioned standoff.

I demand to be told who's behind the kidnapping, and Chauffeur Cap Guy is so confident in my imminent demise that he spills the names Gold and King. He even goes so far as to tell me they can be found at a nearby tea house.

"It's a good thing that's just down the block", I say as my index fingers tighten on the triggers. "I don't have a driver's license." 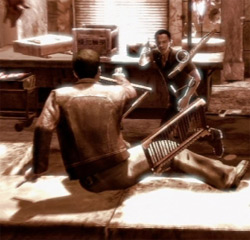 All hell breaks loose. Thankfully, everyone takes turns shooting at me and I escape with a few minor gutshots and two rounds to my face.

As I walk through a doorway that opens up to another alley, my cell goes off. It's the captain, telling me there's something big going down at the tea house.

A man in a golden suit pops out of nowhere and takes a few shots at me.

Wait a second. Didn't Chauffeur Cap Guy tell me about two guys named Gold and King? That guy in the golden suit... could it be King? I chase after him for a few blocks until I find myself at the tea house.

Time to play it cool. I stroll in, sit at the bar, and order my favorite drink: a tequila with Sprite, no pepperoni. I knock back the contents of the glass before me in one gulp, then regret my decision immediately. Damn these tip jars. The bartender returns with the drink I ordered, and I nurse it while keeping tabs on my surroundings.

On the second floor balcony, the man in the golden suit and some tattooed musclehead are planning my demise. I smile to myself. Go ahead, drive a tank through the door. I'll still have the tactical advantage thanks to the polished surface of this bar. I could slide back and forth on this baby for days.