US under magic attack 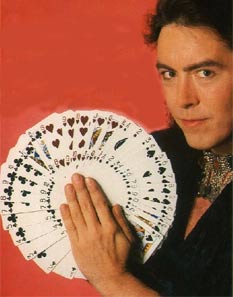 Know the face of the enemy. DON'T STARE AT HIS TRICKERY TOO LONG OR YOUR SOUL IS FORFEIT!Once again the United States has come under siege from a dangerous organization of fanatical terrorists. They are bent on bringing down "the Great Satan" or "Uncle Sam" or "Punchy McNationBuilder" or whatever the hell terrorist zealots call the United States these days. According to CNN, the FBI has been targeted by a terrifying group of magicians determined to "prestidigitate the shit" out of us. At least that's what I am inferring without any factual basis whatsoever from this article I kind of read some of on CNN.

Apparently a cabal of evil magicians, operating out of a secret base in Las Vegas, has managed to infiltrate the FBI and steal a bunch of illegal weapons, laptops, and secret data. It's difficult to be certain exactly what sort of secret data would interest evil magicians, but my best guess is that it had something to do with putting a cup and a handkerchief over a coin and then making the coin disappear. Obviously this sort of information in the hands of the government would pose a great threat to the existence of magician terrorist organizations everywhere.

Using my incredible faculties of deduction and "fact fabrication," I have pieced together a dossier on what I have learned of the "Black Circle of Magicians and Showmen". I present this information here in the hopes of securing the good confidence of the FBI and my subsequent removal from their list of "most wanted lazy seditionists".

The Black Circle of Magicians and Showmen

Arsenal: The weapons they stole from the FBI using sleight of hand and the undeniable power of the unknown.

Base of Operations: An as-yet unidentified casino in Las Vegas, Nevada. Cells and splinter factions may exist in Atlantic City and at children's birthday parties, disguised as innocent drunk clowns.

Modus Operandi: Seeing as how the BCoMaS is composed almost entirely of magicians and their assistants, it should come as no surprise that their methods are extremely magical. For purposes of infiltration they will rely heavily on distractions like smoke and busty women in skin tight outfits, along with large hair, unbuttoned shirts, and overwrought new-age music featuring dolphin noises. More traditional terrorists from this organization will use mirrors and unusual hand movements to distract their quarry while they slip past undetected, often through the use of a trap door or clown car. When threatened with detection, the BCoMaS will use trusted psychics, fortune tellers, and palm readers to provide the FBI with false leads as to their location and methodology.

Agenda: To conceal the secret hellish pact with Satan that all magicians must keep to maintain their otherworldly powers of teleportation and skullduggery. They also wish to control the world through the use of prestidigitation, strengthened by their alliance with the Secret Order of Clowns and Balloon Animal Artisans. 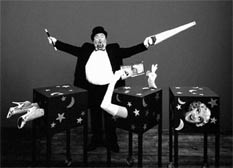 The Great Mordrake performs another horrifying act of sedition, pictured here in 1947.

The Great Mordrake: Mordrake has been a practicing magician since 1939 and is a master of disappearance, making him highly elusive. He has evaded multiple federal warrants by using smoke generators, and his ability to produce objects from his hat means he should be considered armed and dangerous at all times. Mordrake has even been known to produce smaller hats from within his hat and then remove even tinier hats from this already small hat which, when thrown, will cause you to explode. He serves as the leader of the BCoMaS.

Regina the Amazing: Regina Larson was like any other high-rent stripper in 1986 when she accepted the corrupting power of Satan into her heart and became a magician. Since then she has been known as "Regina the Amazing" and her hellborn power to dazzle audience and federal agents alike with pasty twirls and demonic card guessing have rocketed her to the top of the FBI's most wanted list. So fearsome is her ability to guess cards that it is rumored she can identify a card in your pocket just by speaking to you on a cellular phone. She has single-handedly caused the FBI to upgrade from standard poker decks to UNO decks on all security access doors.

I personally advise anyone coming into contact with these three fearsome terrorist or their minions to realize that sometimes it pays to get help. They all have powers beyond that of a mortal man and will not hesitate to use them if cornered. Do not attempt to apprehend them, call the FBI at once. When confronted with magicians, just remember the Caesar's Palace raid of 1967, when two agents where brutally sawn in half and one was left "flabbergasted."

Look What R-Lo Dug Up!

Lowtax has once again risked life and limb, or at the very least his sanity, to bring us all a review of another game which you should avoid like that girl in your study hall who smells like baby powder and onions. This time around it is the wonderful first person shooter "Project: Undead", which uses the acclaimed Pie in the Sky Engine (acclaimed by the makers of the Pie in the Sky Engine and possibly the people at PC Gamer who will acclaim a dead rat if you offer them exclusive screenshots). 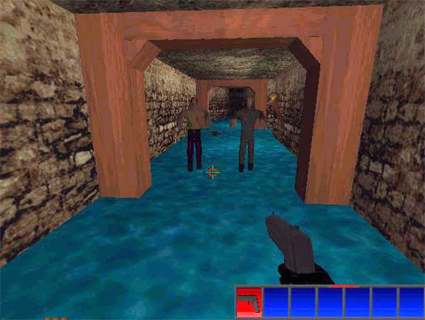 Unbeknownst to me, the bottom of this well was crawling with evil! I was immediately assaulted by two zombies, a bat, and a spider, all of which were apparently in charge of guarding the precious well water. I knifed those bastards to hell and then attempted to crawl up the ladder on the other side of the well, because (as everybody knows) all wells have ladders inside, in addition to lit torches lining the walls. I spent the next four hours trying to crawl up that one fucking ladder.

If you have been thinking about buying or even downloading the demo of "Project: Undead", read this review right now! If you haven't been considering doing either of these things carry on with your miserable life and READ THIS REVIEW RIGHT NOW!