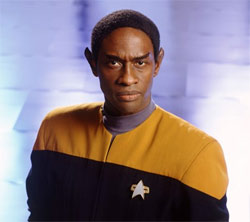 Aneway's dark friend named Tuvok had the pointiest head vaginas of the humans and was the most gullible of all."What is it?" Asks Captain Aneway.

Her dark friend Tuvok pokes and prods at the wires and tubes protuberating from the device I have placed on the table of the conference room. Several other crewmembers examine the object from a respectful distance.

"It is Jessup J. Frink's Confabulated Crystal Continuum Confounder. It is a singular device of unique power and purpose. No other such device like it exists in the whole wide galaxy. Its perspicacious potency is beyond all reconnoitering."

"I think what the Captain means," interjects the dark Tuvok, "is what does it do?"

"Ah!" I exclaim, as though I had been waiting for the question, which I of course was. "Jessup J. Frink found himself at the mercy of one of the most dangerous and dire of conundrums fate has ever devised. Imagine, if you will, a being with all of the power of creation and destruction at its fingertips. Now imagine still further, that you are a humble scientist who is suddenly beset by this being in all its capricious crapacity."

"This fickle fiend found felicity in the suffering it brought to poor Jessup J. Frink. It would transport him to faraway places, appear as friends or enemies, and take him on harrowing adventures. Heed me when I declare that the jaunty japes of this sinister jackanapes were no laughing matter for my fine friend Frink."

"Each time this monster would leave, as suddenly and mysteriously as he had appeared, Jessup J. Frink would descend to his secret lab to work upon this device. For you see, humans, this contemptible creature was not alone, it was simply one of an entire species inhabiting a realm beyond my feeble reckoning. It is called the Continuum and in it resides a preposterous people with plenary powers-"

"You're talking about Q?" One of the humans asks.

My face falls with disappointment, but the humans are not nearly perceptive enough to understand this reaction. Of course I am speaking of Q, but I had not thought these humans would know of the Continuum except perhaps by legend. What business do these creatures without even so much as a glorxdrive have knowing about the Continuum well enough to identify an individual member?

Ah, but this sort of peccadillo might give pause to a lesser salesman, but not one such as I.

"Why, perhaps," I say with a slight bow, "I see you are familiar with the inhabitants of the Continuum."

"To say the least," Captain Aneway makes her face go even more sour.

"Well," I continue, "then you know that the reputation I have envisaged to you is not so exaggerated. You will also clearly see the value of the device, which as I was getting to, disrupts the fabric of non-geometratic space to prevent members of the Continuum from sundering the separations between our realm and theirs."

Aneway stares at me blankly.

"It keeps away members of the Continuum," I summarize.

Captain Aneway whispers to several of her crewmembers. She seems to pay particular attention to the words of the square-headed man with drawings or tattoos on his face. How very vulgar. Let us hope they do not encounter any Hhrlrhinians. Known for their millennia-long war with the tattooed Kulxim the Hhrlrhinians have a deep racial hatred for any sort of facial tattoo.

Such is the knowledge only a traveling salesman of unimpeachable lineage such as myself would possess.

"How is it operated?" The dark Tuvok asks of me.

"Why, it is operating currently!" I announce. "The Jessup J. Frink's Confabulated Crystal Continuum Confounder is operational at all times. It is self-cleaning, self-repairing, requires no fuel, and is a perfect centerpiece for a banquet. I only joke, please! As I speak we are fully insured and inoculated against intrusion by interlopers from the Continuum."

"We will have to perform some scans to guarantee that the device is working before we begin any sort of agreement," Captain Aneway explains.

"Of course, of course!" I bow and sweep my front arm in a gesture of invitation.

The dark Tuvok and a few other humans begin to sweep their computational sensors over the device. As I had anticipated, they find exactly what they are looking for and begin babbling about "incredible tachyon field concentrations" and "plasma induction nodes." Their technobabble is meaningless to me, but the device appears as it should: a nearly magical wonder of science fiction. 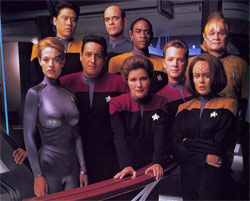 Stop staring at me! Why are you all staring at me?!You see, Jessup J. Frink's device appears as everything to everyone. It is designed to precisely live up to expectations and other than that, it does precisely nothing. I purchased the accursed thing from a Caatati junk merchant named Sleef. He told me I was buying a Denobulan omicron irradiator and all of my scans told me that was what I was buying. When I hooked it up to my radiation chamber it did absolutely and precisely nothing.

Jessup J. Frank's device is some sinister evil Starfleet's sensor countermeasure probe integrated with a telepathic sweeper. It detects what someone or something is looking for and it relays that data back. It is sure to allow your evil Starfleet armada to sneak past the enemy fleet as a harmless cargo ship hauling sex arms, but it has its uses for an enterprising entrepreneurerer such as myself. Build up the expectations of a customer and they will see exactly what you want them to see, as long as it can physically resemble a giant toaster covered in tubes.

The best part? It has a transporter recall button. Luckily for me, the Caatati was too thick-brained to figure that fact out for himself.

Okay, so I am a B'omarrian-giver. I'm not proud of that, but sometimes an honest salesman has to fudge the rules of trade a little bit.

"We are interested in negotiating a price," he says with a complete lack of enthusiasm.

This is my favorite part!