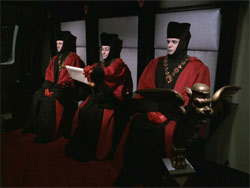 The Continuum is one better business bureau you don't want to face down.I am afraid to confess that I am being forced to depart from the USS Voyager a bit prematurely. As it would happen, I somehow managed to sell a Continuum blocking device to the only starship in the Delta Quadrant that receives regular visits from a member of the Continuum.

The creature the humans called Q has appeared on the bridge and is even now tormenting Captain Aneway with some sort of living diorama of unicorns and trumpeters. It is only a matter of time before I am called to account for my deleterious doings related to our transaction.

I am loading the last of my loot into Fancy Specter when I feel a tapping at my shoulder. I turn to see a human I do not recognize in one of their uniforms.

"I must go," I explain, "I have matters to attend to with the Trabe. I have left a full refund in my quarters. So if you will just-"

I suddenly find myself hanging upside down from the ceiling. It is a most uncomfortable position and it agitates my allergies causing mucus to flow into all six of my sinuses. The human stands next to me on the ceiling, similarly inverted, although he seems totally relaxed.

It is at this exact moment that I realize the perilous personality of my predicament.

"You are from the Continuum?" I ask, trying to keep from coughing on the mucus.

The human smiles and nods slowly and deliberately, malevolent mischief twinkling in his eyes. Without the benefits of my tetromarkometer, I am unable to fully gauge his personality. But of one thing I am certain, he does not seem gullible. Pranksters rarely are.

"Captain Janeway tells me you sold her a device to keep me away," he clucks his human mouth-parts oddly. "That is a very rude lie to tell Captain Janeway."

"Please," I am not above begging, "oh mercurial one, if you are going to kill me find it in your frenum to fulfill one last wish and transform yourself into a borg. I have always wished if I were to be killed it would be by a borg."

I say this as my rear arm reaches for the borg neutrino disruptor in my vest pocket. But this Q does not heed my wish. He cocks back his human hands and then brings them together with a loud pop! He then repeats this gesture again and again, slowly and deliberately and gazing at my eye stalks. If this is some sort of sonic human strike it seems surprisingly senseless against my species. 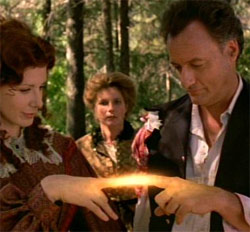 I would have never said anything to these humans if I had known what sort of insane history they had with the Q Continuum. I don't even know what's going on here and I've seen it all.Q returns us gradually to the floor deck with his powers, rotating me in the process. He continues this human gesture of slapping his hands together. I realize at last that it is a cheer of support.

He pats me on the upper shoulder and pushes me in the direction of Fancy Specter.

"You had better be going," he advises. "I think my mischief has put Captain Janeway in a very foul mood and I believe she somehow views you as complicit."

I nod and wave and clamber into my ship. I keep waiting for Q to reappear and slay me at last, but it does not happen. As my ship lifts off the deck and blasts through the suspensor field I can see humans carrying weapons running into the hangar. Too late!

Once I am free of the ship I engage the transporter recovery for Jessup J. Frank's device. It appears exactly where it was when I arrived on the human spaceship.

I return my attention to the flight controls. Before the USS Voyager can complete a ponderous maneuver and bring its weapons to bear, I have already engaged my glorxdrive. Before traveling far in the stream of glorx I interface one of the human computers traded to me with my own navigation computer.

A bluish planet appears on my screen. Population: human. Gullibility: very high. I think I have identified my next business trip.

I hope you have enjoyed my adventures in the Delta Quadrant. This is just one of many such adventures and I highly encourage you to use the opportunity you have before you and make a further purchase of further adventures. At the price of only 100 druknels, you will find an experience that exceeds even the experience you have just experienced.

No? Not even if I offer you the entire set of 15 adventures for only 900 druknels? Ah, well that is too bad.

I do have this other thing that may interest you. A certain device that you humans might find very useful...