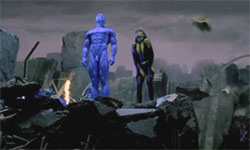 Surprisingly, full blue cock is on screen for a good 20 minutes of the movie.Up to this point in the movie it is heavily implied that the missing Doctor Atomic was the man behind all the murders, but Rorschach uncovers a clue suggesting it is somehow linked to Ozymandias. He also learns of a secret polar base constructed by Ozymandias in the 1970s. Rorschach and Night Owl confront Ozymandias about his plan and he reveals that he intends to trigger a bomb that will cause a nuclear war to break out between the United States and the Soviet Union. He hopes this will, "Make them come to their senses."

Ozymandias also reveals that Doctor Atomic is not dead, but instead he is hiding on Mars at his secret base there. Rorschach and Night Owl fight Ozymandias, but he is much too powerful and they have to flee.

Realizing that the Watchmen can't stop Ozymandias from possibly destroying the world, the trio flies in Night Owl's Owlship to Mars to beg Doctor Atomic to intervene. Here it is revealed that Silk Spectre and Doctor Atomic are romantically linked, but Doctor Atomic killed the original Silk Spectre (I think, it's hard to tell) because he is radioactive.

Rorschach convinces Doctor Atomic to fly back to earth and battle Ozymandias. On his way back to the polar base Doctor Atomic encounters thousands of nuclear missiles in midair, but he uses his powers to redirect them all into the sun. Then he flies down and we see that Ozymandias has already detonated his bomb, destroying both New York and Moscow. The special effects here are awesome and the montage of Doctor Atomic weeping as he walks through the wasteland of downtown Manhattan is almost worth the price of admission.

Finally, Doctor Atomic confronts Ozymandias, who is furious because his plot has been foiled. The pair battle, crashing through mountains and destroying monuments as they wrestle in midair and fly around the globe and ultimately around the solar system. Their epic confrontation ends back at Atomic's Mars base. I won't spoil what happens there, but let's just say that Rorschach plays a key role that he did not play in the comic book. 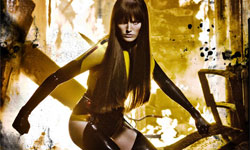 Silk Spectre brings raw sensuality to the screen...questionably even during an insane rape sequence that includes her moaning, "Yes, yes!" The ending is much more positive than the comic and it even contains a thinly-veiled reference to Obama. After the resolution on Mars, we see what has happened to Richard Nixon back on earth. His dead body is in the ruins of the Whitehouse. But a hand reaches down and picks up the seal of the president. A black man's hand...

Overall, Watchmen will be entertaining to everyone looking for a good popcorn flick to give them a jump start on the summer blockbusters. If you can turn your brain off for the film's overlong 163 minute run time you will enjoy yourself. Zack Snyder has taken the incredible art direction of his films like "300" and "Sin City" a step further. The comic panels leap to life in hyper-realistic color and ultra-violence.

The special effects are top notch, which is good, because nearly every shot includes moving CGI. Not a scene goes by without strange things happening in the background, mostly references to Watchmen's alternate reality and troubled times that are sure to please hardcore fans.

There is an astonishing amount of profanity. I'm not bothered by foul-mouthed characters, but it seems excessive, and includes a flashback to a 1940s version of The Comedian who promises the original Silk Spectre he will, "Fuck the shit so far up [her] ass [she] is going to taste yesterday's breakfast." This is said during a military briefing and is laughed at by the other characters present.

There is also an unpleasant rape in the movie which is portrayed for maximum eroticism. I know what Snyder was going for here, trying to make the audience participate in the rape by proxy, but it comes across as grotesque and out of place. The scene is mercifully short, but this and the profanity make you feel like you are being punished for the film's R-rating.

Technically, Watchmen is a triumph. The cinematography and special effects are excellent. The casting is fairly good, although I don't think Adrian Brody quite works as Doctor Atomic. Fans of the comic will not find a completely faithful adaptation, but they might be willing to forgive the changes for the obvious love Snyder puts into the set design and the details.

Those of you who aren't familiar with Gaiman's comic masterpiece and those of you looking for something a little more cerebral than, say, "Fantastic Four" should steer clear of Watchmen. It is a thrill ride and a treat for old fans, but it is not going to being winning new audiences to Gaiman's elegant work.

UPDATE: For those of you emailing me, I DID NOT sign the NDA. I might have accidentally told them on the phone I did, but I have the blank NDA with no signature that says they can't sue me for leaking details. Suck it up and don't be a baby about having your movie spoiled. I left the ending out.