Sometimes a boom mic is accidentally lowered into the frame of a movie. For some people this momentary intrusion is ignored. For others, it serves as a reminder of the process surrounding the film, making it more difficult to buy into the fiction.

Video game DLC is like that boom mic if it had been lowered directly into the center of the screen, cracked the camera lens, then given lines of dialog along with a cgi mouth in post production.

Even if the quality of a given bit of additional content is amazing, its existence often fragments and lessens the overall experience of a game. When you purchase a new title and load up the menu, seeing a message along the lines of "additional content is now available" acts as a deflating reminder that you don't have the entire package.

It's not about cost. Producing content and charging a fair price is a fantastic concept, and if a game is good most people will be happy to pay for more. The problem lies in the type of content that is created, and the way it is integrated.

When a game has a story, or at least a pretense of a story (in other words, 99% of games in this terrible era), extending the tale by a few hours with DLC is usually awkward. No one would buy an epilogue or additional middle chapter for a book. There's something inherently weird about content of that size pretending to belong in a longer narrative.

You know what's not so bad, though? A short story that fleshes out the setting, or a proper novella to catch up with characters after the conclusion. The Pygsy DLC for Enslaved is a perfect example of the former applied to video games, as it uses an entirely different character with unique controls to explore the game from a different angle. If you're looking to emulate a novella, proper expansion packs like the classic Baldur's Gate II: Throne Of Baal are the way to go. 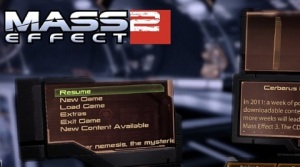 While BioWare did a lot right with Throne of Baal, they are currently setting a terrible precedent with their integration of DLC. In Mass Effect 2, you are presented with a the Cerberus Network, a colorful and creative news update which also happens to slow the main menu to a halt and make it impossible to play while the game checks to see if there's any content for you to buy.

In Dragon Age, they actually placed an asshole quest giver in your camp, then had him tell you that you couldn't help him until you bought the DLC.

No, you guys. No. Don't put this shit inside your game, or on your main menu. Don't slide a bowl in front of a customer then tell them that there's more where that came from while stirring the pot with your bare hands.

I won't pretend to know the best way to present DLC, but I will say that Dead Rising 2's Cases have seemed the least offensive. Their standalone nature and cheap price helps them to serve as teasers for the full game while being separate things that don't lessen Dead Rising 2 in any way. Meanwhile, they are fairly lengthy self-contained adventures featuring new environments, focusing on concepts that weren't explored fully in the base game.

DLC is, for better or worse, probably not going away at this point. The best thing to hope for, as both a customer and supporter of the industry, is that more attention is paid to how their implementation impacts the customer's experience with a game that was years in the making. The more that players feel ripped off or nudged into a neverending game of content catch-up, the smaller the potential market will be as time passes.

Exclusives and pre-order bonuses, however, can take the broken carcass of a Nokia N-Gage and tear a jagged hole across their abdomens, dropping to their knees as +1 rings, swords and guns spill to the dust in a spreading pool of sticky gamerpoints.

Dawn of War II: Retribution
Six races to play through the campaign with, half the ideal amount of loot that would make it possible to outfit your dudes the way you want, hundreds of combination laugh/cringes when your Commissar blows away one of his own soldiers to scare everyone else into shooting enemy butts harder. 8/10

Gray Matter
The only compelling puzzle is why the main character is a walking cleavage. 5/10

Bulletstorm
Bounce around a pinball table of bad guys, collecting points and rolling through the most insane ramps to have ever been constructed out of pure explosions before being exploded. 8/10

Knights Contract
Since the word "contract" is too exciting for the content of this game, perhaps they should have gone with "tax form". 5/10

Fight Night Champion
The stories in arcade fighting games really add so much to the experience, now imagine how great it would be if they were twenty times as long and totally self-serious. 7/10

PixelJunk Shooter 2
I haven't been splashed with this much stomach juice since the end of the above article. 7/10

de Blob 2
I want it painted black, but all I've got is these primary colors. 6/10