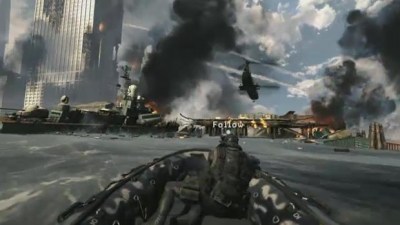 You are scuba diving, but military scuba diving. Follow that path into that submarine. Stand in the hallway and shoot those dudes in those specific places. Hell yes. Remember slow motion? Open that door and slow motion happens. Now push that glowing thing and climb the ladder. Look at all this war going on around you, the war that you have no effect on! Follow the marked boat, but don't veer off course. You can't. Every boat in the world is on fire in this one coastline, and they are all shooting the hell out of each other. Cinematic, right? That's what you play games for. Keep pushing that stick forward, soldier. 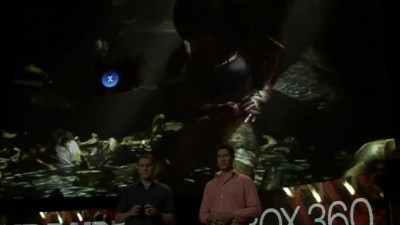 Mash the X button to pull that chunk of metal out of your side. Push the stick forward to move down that corridor. You are having an adventure now! A dude is grabbing you... wiggle the stick to break free! Now move forward again. If you forgot what forward is, it's the only direction you can go. That one. Another dude grabbed you... wiggle the stick again! Great job. Terrific. You get rewarded with a cutscene! 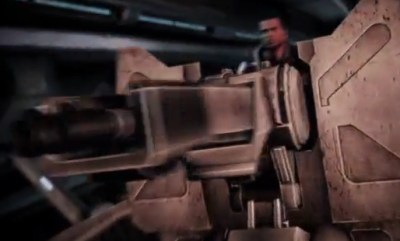 The original Mass Effect had some fantastic role playing segments that allowed you to explore small areas in great detail and have meaningful impact on events that didn't involve the destruction of the universe. Guess what time it is? Turret sequence time! WITH A HUGE BOSS! This spider thing could probably destroy a universe. Keep shooting at it while locked into place. It's like hiding behind cover, only better! 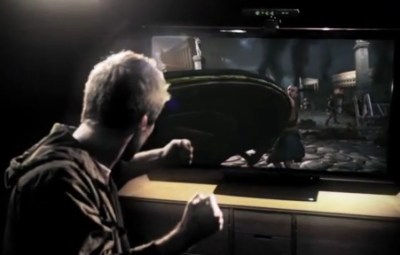 Stop me if you heard this before: You are the controller. Let the game move your character around and do everything to progress. You have more important things to do such as flailing your arms when combat starts. Thankfully, combat starts all the fucking time! 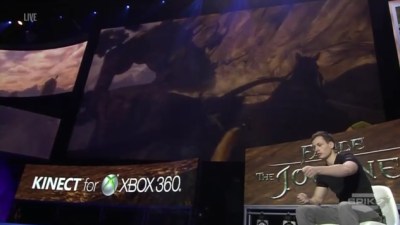 Pretend to steer this horse while it runs along a road that it cannot escape. Good job! Now let the game move your character around and do everything to progress. You have more important things to do such as flailing your arms when it's time to cast a spell. Thankfully, it's almost always time to cast a spell. The only break in the action comes when it's time for the game to cut away to a hilarious Fable booger/fart joke. 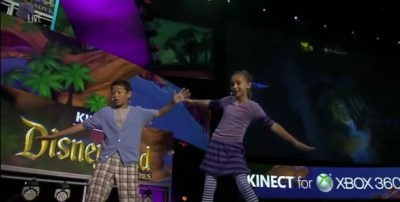 "Woah! This game is awesome, Suzy! I can't believe that thing just happened, I've seriously never played this before! Let's try to get the mega-coin! Aw, we'll get it again! Woah! This is fun! I love Kinect and the Microsoft experience! Facebook! Social media! Fist bump!" 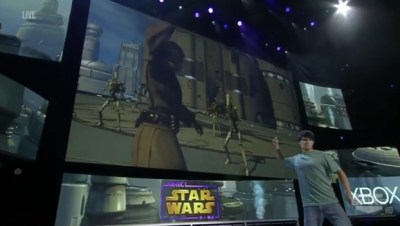 Lightsaber... ON! Time to act like you're swatting a rolled-up magazine at a bee for the next ten hours. Don't worry, the game will move your character around and do everything to progress. You focus on putting more effort into swinging that imaginary lightsaber than you've put into gaining an informed worldview. If you get tired, just ask yourself what your ten year old self would say if he saw you now. Make him proud!

Need For Speed: The Run 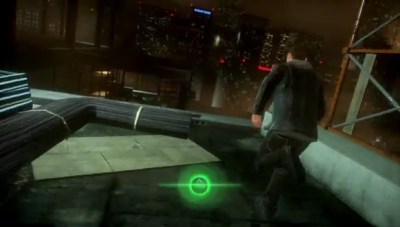 Ahh, a racing game. This is more like it! Keep going as fast as you can! The faster you go, the sooner the game will take control away from you to initiate a scripted crash. Now your dude gets out of the car (because going on foot is always a fantastic idea in racing and skating games) and runs. Of course, this wouldn't be cinematic if you were controlling the running parts yourself. Just watch this ACTION-PACKED cutscene and hit the buttons when prompted! Thanks! You might get to race again, eventually.

Hunted: The Demon's Forge
Shooting isn't as fun as Gears Of War, the hack-n-slash action isn't as fun as any random game with melee, and the touted RPG elements are as nonexistent as this article's audience. 5/10

inFamous 2
I'd like to invite this game to join Crackdown 2 on stage so they can formally share the award for "Sequel That Doesn't Justify Its Existence". 7/10