The Gears Of War 3 beta has gone out to people who write about games and are marginally important, well known, or whose opinions are of some significance. In other words, I haven't played it.

Allowing minor setbacks such as reality and truth to get in the way of my journalistic integrity would set a terrible precedent. You come to this poorly conceived, largely directionless feature on a biweekly basis for information about games which have been covered in a million other outlets, and you're going to get it. What follows is my account of what I imagine the Gears Of War 3 beta is like. 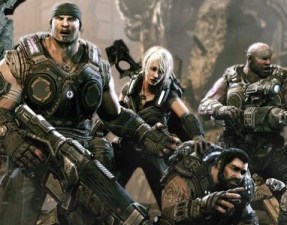 The first major change comes at the title menu, which has a "3" near the familiar Gears Of War logo. This clever bit of design hints that the game you're about to play isn't your daddy's Gears Of War or Gears Of War 2.

Once you find yourself in a multiplayer match, you'll discover that the men are large and muscular. These are not the sort of marines you'd want to mess with in space.

The male characters have very deep voices. I would classify many of them as gruff and strong. They use expletives because, hey, this is war, silly. They are under tremendous pressure to shoot other guys, which is why they bellow things like "fuck yeah" and "get some, bitch". These curse words and their voices lend character to the game, which does a great job of immersing you and making you care about their plight.

There's also a woman. She has big muscles and sounds tough. This is interesting because in all other games women are shallow and weak.

When you run, your character goes into a sort of crouch. This has two major benefits. First, it keeps your head down and allows you to avoid incoming fire. Second, it keeps the animators from having to make a sprint animation for a nine foot tall beef pile, which would inevitably look like Andre The Giant with a wedgie.

Surprisingly, cover plays a very important role. You will stick to cover and aim around corners or over barricades. When an opponent leaves his cover, you should shoot him, preferably while remaining behind cover. The good thing about cover is that it protects you from getting shot. It also slows down the action, since it takes longer to kill someone behind cover than in the open. This slower pace makes Gears Of War 3 a thinking man's shooter.

As important as cover is, guns are just as vital. There are many times when you will find yourself shooting a guy. Thank goodness you have a gun for that.

Many of the guns are large, probably so they don't seem too light for the space marines who have all those huge muscles. These guns make blood fly out of guys, and when you shoot a guy enough, they make him fall down and sometimes explode. I'd say this is the single most important advancement in shooters in the last twenty years.

It's not all about the guns, however! There are also weapons you can use when you get very close to a guy. These make everyone scream - the dude doing the killing, the dude getting killed, dudes that are just nearby and understandably freaked out by the whole thing. They make a lot of blood, so they're worth trying to do.

The environments are very interesting. The world is destroyed, but you can tell that it was once beautiful. It's almost as if the beauty was destroyed. This is a very powerful concept. As you play, you find that the theme has a large impact on your game, almost as much as the story and deeply developed characters

Overall, I'd say that Gears Of War 3 is certainly shaping up to be something.

Shadow Harvest: Phantom Ops
I came in expecting a Harvest Moon game with a farm run by Ghost Recon operatives, I left a little angrier at the world. 1/10

WWE All-Stars
The NBA Jam of wrestling games, or as I like to call it "how every wrestling game ever made should have been". 7/10

Tiger Woods PGA Tour 12: The Masters
An improved game, ruined by the DLC courses which appear in the career mode, prompting you to purchase them or lose out in the rankings - why is it okay for the Tiger Woods series to release games without every PGA Tour course year after year? 6/10

Might & Magic: Clash Of Heroes
The game that proves Puzzle Quest was relatively basic, unpolished, and flukey, just in case the horrors of Puzzle Quest Galactrix and Puzzle Quest 2 hadn't already sealed the deal. 8/10

PlayStation Move Heroes
It's like Street Fighter and Mortal Kombat finally came together - in a river rafting game. 3/10