Brink has some technical issues. A large number of PC players are experiencing an annoying grid laid across every texture in the game. Rolling their drivers back doesn't help, nor does updating their drivers, tweaking the settings in himem.sys, or pulling down the in-game console and entering "id_nogridplease".

Then there's this victory screen: 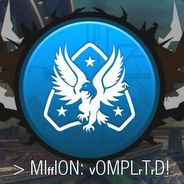 Brink has terrible bots. They seem reluctant to use their class-based abilities such as reviving you and accomplishing missions, instead focusing on more important tasks such as grouping up twenty feet behind you and watching as you do everything yourself.

In just about every mission I've played with bots, one of them has managed to park himself just outside of the spawn point, shuffling around a small area as though searching for something that fell on the ground. Perhaps it was a dropped contact, or the missing chunk of his AI.

Brink does a remarkably poor job of explaining the game's mechanics. There is a twenty minute tutorial video, which is pretty much the most clunky and incompetent way of introducing a player to your game. The game doesn't teach you the intricacies of the SMART movement system, which allows you to do all sorts of amazing things, but most people will think it's simply a button that lets you vault over objects. It does not tell you that you can lean, or that your Resistance fighter can also be used as a Security officer. 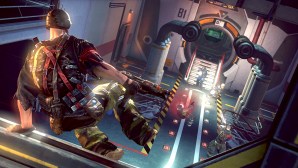 Important actions such as self-buffing are not explained, but tucked away in UI elements that new players won't notice until they've played a few rounds.

Some people argue that you can look most of these things up in the settings. These people are right, and they are also morons. It's possible to communicate everything you need to know in-game through methods that won't get in the way of experienced players. Just look at Team Fortress 2. Doing so doesn't dumb down a game, but open it up to new players that will eventually become experienced and make the game you enjoy more successful.

Brink has no real single player campaign. The Ark is a truly imaginative and appealing location with a backstory that lends itself to all sorts of potentially interesting events. The result? A handful of multiplayer maps prefaced by cutscenes that somehow make me feel less connected to the world.

The scope of the cutscenes are extremely limited. A handful of characters talk about events that are already in motion, mentioning names that have no meaning to you. They feel disconnected from the actual gameplay and make the events of the game feel very small.

Brink has pitiful number of maps. There are eight campaign (read: multiplayer or single player with bots) missions and a handful of "what if" scenarios. They are all gorgeous and mostly fun, but since they are relatively small, they fail to provide enough meat for a multiplayer game and enough context to flesh out a true single player campaign.

Brink does a poor job of communicating when an objective needs to be done if you aren't already the proper class to accomplish that objective. This leads to you sitting around as a medic and guarding a safe when the game needs you to be an engineer and open that safe.

Brink has a pitiful number of objectives. Once you've played the small number of maps a few times, you will have seen everything there is to be done. There should have been way more objectives with dynamic consequences for how the map plays out. 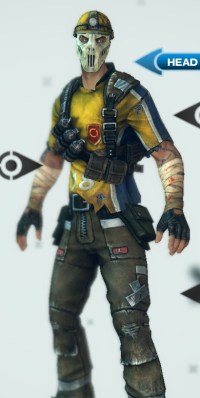 When you jump into a game with other humans and know the basics, it's pure fun. Running along a wall, vaulting over a handrail, then pulling yourself onto an otherwise inaccessible ledge and finding yourself behind the enemy is a unique thrill. Sliding into someone or hitting them with a grenade (these are weak on purpose, meant to deny access to areas and knock people down rather than frag them) then taunting the incapacitated enemy before finishing them off is devious fun. Even the simple act of shooting any of the dozens of guns is immensely satisfying thanks to the animations and meaty sounds.

Working with a team is more rewarding than any bullshit killstreak in a CoD-alike. Maybe you're running into danger as a medic, dropping revival packs on your downed teammates. Or maybe you're an engineer, buffing everyone else's weapon damage then selectively applying additional armor buffs at just the right time. Perhaps you're an operative, tinkering with crucial map points to make them more difficult for the enemy to hack. Even the simple act of restocking ammo as a soldier is huge, as a heated battle in a tight corridor can leave even the most gun shy of players with empty clips.

These are simply examples of the lowest level of teamwork. The more you play and coordinate, the more rewarding the game gets.

The maps are beautiful. One of my favorites is a futuristic mall/resort with a shallow man-made river flowing through the center of a walkway that winds through the entire level. Almost everything in the map is a shade of blue. Instead of coming across as monotonous, the lighting and art design make all of this blue set a unique tone that makes the location atmospheric as hell. Ducking into a random room and finding it white or red makes for a momentary disorientation.

Creating your character, unlocking skills and powers, equipping different clothes, and personalizing your guns are all fantastic elements that make for moments of absorbing downtime after matches.

There are some big problems with Brink, absolutely. The actual meat of the game, however, is fantastic. I hope that Splash Damage not only addresses the technical and design issues, but ensures long term success after this bumpy launch by supporting the game with free maps and clothing/weapons.

Brink
The best game that people will be afraid to try since Alpha Protocol. 9/10

Section 8: Prejudice
If you're a tv or film director and you want one of your characters to play a generic shooter, I've got something for you. 6/10

LEGO Pirates Of The Caribbean
Ninth time's a charm, or is it a barely perceptive shuffle forward for a stagnant series that can only be loved by websites that claim Assassin's Creed has a great story... I forget how the saying goes! 5/10

Thor: God Of Thunder
Continuing the fine tradition of shitty movie cash-ins, an art that was believed to be lost after the late 90s but has returned with a passion over the last five years. 3/10

Virtua Tennis 4
Madden and Tiger Woods get to rest on their laurels because they'll be ultra popular no matter what they do, I don't know what you tennis guys were thinking. 4/10