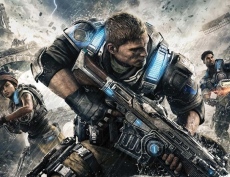 All controls are inverted by default. Even face buttons and triggers. Every attempt to reverse this permanently makes the screen area smaller.

Chainsaw-gun melee kills have been reworked. There is now just one melee attack. The animation begins in the opening moments of the video game and continues throughout the entire campaign. You run around everywhere with the same screaming dude impaled on your chainsaw-gun, the engine revving and chunks flying everywhere. During emotional cutscenes the execution attack continues, splattering the screen.

When your character slows down and puts his finger to his ear during a conversation with someone on comms, you can feel an enormous coarse finger clumsily brushing against your actual ear.

Bandana rendering has been completely overhauled, utilizing the TressFX technology that made Lara Croft's hair so detailed and bandana-like.

Took advantage of the many recent advances in HDR. Now players will be stunned by the subtle transition between colors, especially apparent when going from grey rubble to greyish brown chunks of stone.

In light of the last few years of gun violence in the United States, all guns in Gears of War 4 have been retextured to prominently display the words "SORRY ABOUT THIS".

Gave everyone more believable human proportions. A human is a wobbling cube of sausage in a funhouse mirror, right?

Replaced all dialog with a guttural, "ANYA!"

Updated the in-game soundtrack to remove every corny 80s-style rap about staying in school and eating vegetables. The soundtrack has gone from thirty six songs to zero songs.

Destiny: Rise of Iron
Everyone who gave Destiny the benefit of the doubt and kept supporting it over the last two years are now having the last laugh, because with this latest addition it's almost a complete game. 6/10

The Tomorrow Children
This game is so experimental and so full of microtransactions that I'm pretty sure I just paid three dollars to delete it from my console. 2/10

Sonic Boom: Fire & Ice
Someone might have to look this up, but this is probably the first video game to feature the elements of fire as well as ice. 6/10