Hatred is More Extreme Than You Could Possibly Imagine

Hello, you pansies. This is an interruption of your regularly scheduled feature. We, the super tough badass studio behind Hatred, have taken control. 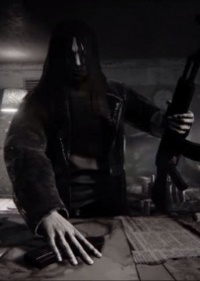 "Now where the heck did I put my gun's trench coat?"Yeah, we've been banned from Steam. We'll use that as a badge of honor. Like when a bad movie uses quotes from unfavorable reviews in its promotional material. That'll show them all to fuck with us. That's right, I said "fuck". We're very edgy and don't you forget it!

How edgy are we? By now you might know that we follow a Neo-Nazi Facebook group. When everyone in the biased gaming media got worked up in a tizzy about this, we responded by explaining that we weren't openly endorsing Neo-Nazis. We just wanted to use the radical group's writing as one of our only sources of geopolitical news. It's really not that big of a deal you wimps!

You might have also heard that several of our employees have been linked to other hate groups. If that offends your weenie liberal sensibilities, so be it. In fact, we take pride in being so gross that noted gross person Brad Wardell would probably hesitate before hiring us.

Perhaps you saw the trailer for our game. A super cool white man in trench coat, his long poorly modeled hair jittering as he mumbles to himself in the most generic tough guy voice imaginable. A shooting spree with multiple drawn out executions of unarmed civilians. Our amazing tagline: "The death is coming Q2 2015".

Most people compare our game to Postal. Uh, no. That series has too much self-awareness for our taste. Even the first Postal game, the most grim and straightforward effort, featured silly objectives such as killing Santa and taking out an entire marching band. Shootings are not meant to be portrayed as funny or over the top. They are very cool, and should be as graphic and realistic as possible for maximum controversy.

Lately people have been coming to our defense. They deny something that is blatantly true. They downplay evidence. They claim that society is becoming burdened by "weak" and overly sensitive people. I'm not saying I'm a Neo-Nazi, but if I was something tells me those methods would make me proud.

Our defenders have also urged others not to rush to judgment based on one brief trailer and a mere handful of ties to hate groups. We thank them and fully agree with this level-headed sentiment. You have not even seen one tenth of the depraved badass stuff that we have created.

When the death is coming Q2 2015 your soul will be curbstomped by such brutality as: