Officially, I am a war vet, setting out to find the bones of my father in a tiny vessel seemingly designed to sink and deposit my own bones in the nearest puddle. 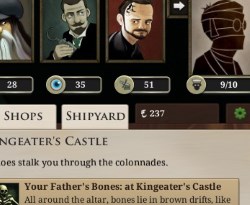 What have I been up to? Oh, just everyday sailor stuff.Unofficially, I am the smartest captain to have ever sailed the Sunless Sea. Since I received word that my coming journey would involve a lot of reading, I did some writing of my own before embarking. Well, not writing so much as editing. Editing a config file. Not enough to break the game, mind you. I simply changed certain values enough so I wouldn't simultaneously run out of fuel, have my crew eat one another, and succumb to horror-induced panic immediately after leaving shore.

What should you know about Sunless Sea? London's a mile below ground, in a very big and very damp cave. Everyone's super weird. There you are.

It may seem like you can travel from port to port, making enough money through trade and battle to upgrade your ship. This isn't even remotely the case. Everything hates you. There's no profit to be made.

The currency you're most likely to encounter is the written word, often in the form of secrets, news, reports, and choose-your-own adventure sequences. The writing in all of this is great. Not just "good for a video game, I guess", but genuinely clever and atmospheric and playful. If it pulls you in you'll spend hours uncovering the entire map just to wring the stories out of every creep and haunted mushroom lighthouse.

Combat is relatively straightforward. You target an enemy. You wait for your men to get a targeting solution. You tell them to fire. You slam the boat into reverse and repeat your curse word of choice, realizing you've just shot a living iceberg that is going to eat you.

To feel better about yourself, do what I do. Avoid everything. Except bats. You can kill bats in one or two shots, so blast them at every opportunity and pose heroically. Be prepared to flee if anything challenging like, say, a crab or a starving man in a rowboat sees you.

Back to my journey. You know, Dad's bones. How's that going?

I've hired a shitty one-handed magician as my ship's engineer, a decision almost entirely based on my curiosity to find out if either of his distinctive qualities could possibly apply to his new job. I've transported a mummy in a casket to a distant port without knowing whether they were passenger or cargo. While scouting a strange building I've accidentally spied on a trio of perfectly nice sisters, one with bats living in her hair.

So it's going pretty well. Obviously.

Homeworld Remastered Collection
The brilliance of the original design shines through, in spite of Gearbox's odd decisions like the Aliens: Colonial Marines-ish UI and the way they replaced every spaceship in the game with Superfly Johnson. 7/10

Hand of Fate
Combining cards and real-time action hasn't been this intense since a goose violently interrupted my attempt to play Magic The Gathering solo. 6/10

Sunless Sea
People who insist that Gone Home isn't a game will probably think this is the weirdest eBook. 7/10

The Order: 1886
Five hours, two identical quick time event boss fights, zero room for player experimentation, one pretty but disappointing PS4 launch game that forgot to come out a year and a half ago. 2/10

Monster Hunter 4 Ultimate
I have been led to believe that man is the ultimate monster, yet my character cannot stab himself for forty minutes then skin himself to make new armor. 6/10

The Legend of Zelda: Majora's Mask 3D
It's an improved version of an experimental classic, but I'm taking a point away from this score every 24 hours until NIntendo brings the normal-sized New 3DS model to north America. 9/10