"Grrl" Gamers - An Important Movement Or Attention Whoring At Its Basest?

That's right, I was feeding them information the whole time. They know all about the spider experiments, the death ray, and the inappropriate hugging. Now it's time for you to die.

Why did I do it? Why does anyone do anything?

How can you hope to defeat the very person who taught you all the moves you know?

Muahaha! My plan was ingenius!

The communicator we implanted in your head doubles as a bomb. The flak jacket we equipped you with at the start of this mission is another bomb. The bomb we gave you to disable the satellite array is actually two bombs.

While you fight this slightly larger group of the same henchmen you've been handily defeating all day, I'll be making my escape to a warm tropical island, secure in the knowledge that you're dead.

You're suddenly regretting all the expensive gear you bought for me at the shop, aren't you? This bronze helmet alone cost you twelve minutes fighting random battles against Poisonous Mud Turtles.

Doesn't this just completely shock you? If someone were writing all of this, they'd probably win some sort of award for originality. But no one is writing this, and unfortunately for you, your story ends here.

Though it was only announced a short while ago, there are already significant details about the upcoming Star Trek MMORPG being released. In the past week alone, it has been confirmed that pachyderms are a playable race, that the standard unit of currency in the universe will be the Euro, and that Patrick Stewart will be providing voiceover work for every single character in the game.

That's a whole lot of information considering the early stage of development, right? Well then you can imagine our surprise when yet another feature was announced just this afternoon. Taking a cue from Everquest 2's infamous "order my fat ass a pizza so I don't have to get up and use the phone" button, Star Trek Online will include a button for players to order an inhaler after finding themselves in a particularly intense situation or discovering a continuity error in the game world. 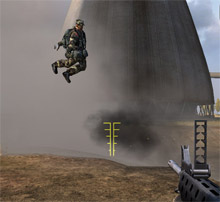 The new Battlefield 2 patch is now available for download, including the following fixes:

- Tanks no longer slide sideways when monitor is tilted

- All maps have now become lava levels to illustrate that war is Hell, man

- Player names will only reset to "Clarence" upon loading a map half the time, down from 100% of the time

- Added bullets, all guns should now work so be careful out there

- New victory conditions make it possible to not only win by bringing the other team's point count down to zero, but by being the first to type "I win" in the chat window, adding a new layer of depth to strategy

- Brownies now render in the correct shade of brown

- Tactical nukes no longer tactical, but rather sort of unpredictable and strapped to a rocket pack for reasons we're not aware of

- After numerous complaints, in chat the word "pumpernickel" will now be picked up by the profanity filter and displayed as "cunt vagina"

- Nali Healing Fruit back in the game after lawsuit, settlement, and subsequent licensing agreement with Epic Megagames

- Unskippable three minute cutscenes now play after every kill you make, including the EA and DICE logo movies which start when you launch the game (during this time, your helpless character will stand motionless in the game with a large bobbing red arrow over his head)

- Casual Fridays implemented, every Friday players will be able to enter the fray with kits including hawaiian shirts and sensible jeans/khaki pants (must be unlocked by getting the "Kill Six Enemies At Once With A Knife" achievement)

- Some people were figuring out how to fly the helicopters, they have now been bolted to the ground and act as landmines

- Touching the stove the first time will result in a momentary blinding flash on the Heads Up Display but incur in no loss of health, however consequent touches result in increasing health penalties

Grab the patch now, and I'll see you on the battlefield!

Dungeons & Dragons Online: Stormreach
Though there is no large world to explore or pvp, Stormreach compensates by including magic missiles and a smooth dungeon master voiceover which hypnotizes you into forgetting that you're paying a monthly fee to play an upgraded Guild Wars. 9/10

The Lord Of The Rings: Battle For Middle-Earth II
This RTS improves upon the original game by including content from Tolkien's books which didn't appear in the recent films, such as the powerful and haunting chapter entitled "Resource Gathering". 8/10

Tom Clancy's Ghost Recon: Advanced Warfare
I'd totally sign up for the military if warfare was this awesome and they'd transmute my boner into gold. 10/10

24: The Game
It's like playing an episode of 24 the television show, only somehow this has worse controls. 6/10

Shadow Hearts: From The New World
A bizarre and battle-heavy rpg set in 1930's America that deals with the pressing issues of the time, such as gay biker gangs (I'm not kidding) and amnesia (I wish I were kidding). 8/10

Dragon Ball Z: Shin Budokai
Another shitty Dragon Ball Z game as we've all come to expect, but this one really pisses me off because it's like the millionth game this week with a ":" in its title. 4/10

Pursuit Force
Hop from one moving car to another and shoot people in this passable modern interpretation of Frogger, then realize after a few hours that you read the title wrong and there are practically no fursuits in the game. 7/10

Street Supremacy
When a street racing game is so bad that that it makes every other title in this derivative genre look appealing, you know a bunch of jerks are going to buy it anyway. 2/10