Welcome to the latest installment of Video Game Article, where dreams really do come true if you dream of marginally coherent writing.

As always, you can get ahold of me at ctstalker@somethingawful.com with comments, questions, nouns, verbs, prepositions, and numbers.

From Garage Games To Major Studio Productions: The Increasing Cost Of Making A Game And Its Effect On The Market

Your fighting style reminds me of puke. Ha ha ha.

So pathetic. Challenge me again when you grow a back spine.

Nyah-haha! So this is what fighting an ant feels like. You are puny compared to my skills.

Noooo! My master will be avenged, I swear it!

My face is beautiful but my fists are merciless. Knuckle time.

This is not the last you've heard of me. I will challenge you again, and next time the results won't be so obvious.

Was that a fight or a cocktail party? Heh heh. You wimpy joke.

I've fought tougher guys than you in a preschool. And I won.

Victory is all of mine.

If you want to fight against me, get serious.

This is no time for amateurs.

It's time to get bruised. With me! 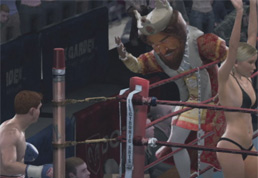 Burger King's "The King" To Appear In Fight Night Round 3, Soda Popinski Comes Out Of Retirement To Throw Down Gauntlet

In a marketing move that could turn out to be either fantastically brilliant or really good, Burger King has signed on as a sponsor of EA's upcoming boxing game Fight Night Round 3, which will feature The King as an unlockable trainer. Early reports confirm that game journalists across the globe have begun working clever fast food jokes into their upcoming reviews, such as "no, he will not throw a handful of paper napkins into the ring if your fighter is taking a beating" and "have it your way with your opponent".

Given the amount of product placement found in television and films as well as the commercialized nature of popular music, this rampant branding is a great sign that video games are well on their way to being viewed as a legitimate art form. Hooray!

Displaying a stunning grasp of what it takes to maximize game sales, Microsoft has announced that the pc port of Halo 2 will only be playable on computers running the Windows Vista operating system. While most everyone assumes this is an attempt to make Vista the new standard, Microsoft cited entirely different reasons for the move, claiming that Windows Vista is the only operating system powerful enough to realize the game's full potential. Without Windows Vista, there is simply no way your computer could run such complicated code as:

I'm going to get so much hate mail from people that actually know how to code.

Lulu 3D
If you only buy one shitty psuedo-porn game with horrific modelling and no gameplay to speak of this year, don't make it this one. 2/10

Tales Of Legendia
Fun battle mechanics and a plodding unoriginal storyline combine in a nightmarish world that looks like something a dog who ate every color of icing in the rainbow threw up, resulting in a pretty solid game if you like your random encounters to happen so often that you'll run into a random encounter while you're in the middle of a random encounter. 8/10

Chibi-Robo
You take control of a cute little Japanese something or other that has to clean a bunch of crap up using a gameplay mechanic that isn't really fun, so basically this is Katamari Damacy: Not As Good Edition. 6/10

Mega Man Maverick Hunter X
This remake of the SNES title Mega Man X keeps the excellent gameplay intact while updating the graphics, but purists may be disappointed by the decision to remove the classic and tragic Rush/Dr. Wiley shower scene cinematic. 8/10

Resident Evil: Deadly Silence
Get ready to guide your remote-controlled meat tank through the original Resident Evil game once again in this version which essentially adds nothing but one more annoying DS game title suffix with the initials "DS". 6/10

Greg Hastings' Tournament Paintball Max'd
Hahaha, what is this shit even supposed to be? 1/10

Known by only the most hardcore gamers, Final Fantasy is perhaps the most underrated series of Japanese RPGs ever created. In 1987 Hironobu Sakaguchi was told by his employers at the incredibly rich Squaresoft that he would be let go after he made one last game. Feeling betrayed by the very company he had helped build to financial security, Hironobu set out to milk Squaresoft of as much money as he could by creating a 15-part game entitled "Final Fantasy" that would only be released in limited quantities with virtually no advertising over the course of forty years. Not only would he collect a paycheck for the next four decades while technically working on his last game, he would run the company that wronged him into the ground. 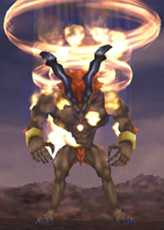 The move was brilliant. Squaresoft is now run out of the basement of its ceo's parents, and the dozen or so copies of each Final Fantasy installment are exclusively sold at a local grocery store. If you can manage to get your hands on one of these games, however, you're in for a treat.

Despite Hironobu's ignoble financial intentions with the series, he has designed each game lovingly. Final Fantasy is always innovative, especially in the gameplay department. Despite the fact that each game is set in the same world it feels like you're playing something entirely new and unique. Character designs are distinguishable but not tacky or ridiculous, and "summons" (magical beings you call on mid-fight to aid you in battle) change entirely from game to game and are just as fascinating to watch the eightieth time as they were the first. The Ifrit in Final Fantasy 7 is completely different from the Ifrit in Final Fantasy 10, for instance, because I think he has a little mustache or maybe horns that point in a different direction. Boss fights are always an unpredictable experience. Will I have to fight three variations of this guy in a row, or four? Which version will have wings? The suspense is killing me!

The plots are handled expertly, with likeable characters you can identify with and motivations that ring true. I, too, was once a brash young hermaphrodite filled with angst and an inability to say anything remotely interesting or endearing. I find that the stories woven into the games are ten times as powerful as anything found in the Chessmaster series. They're truly that good.

If you ever find yourself in Japan and come across a tiny building with a crooked sign hanging above the doorway that reads "Amano Grocery Store", do yourself a favor and stop in. You'll walk out with a little-known gaming gem.