Let's Escape Our Terrible World For One Moment, And Focus On My Terrible Dog 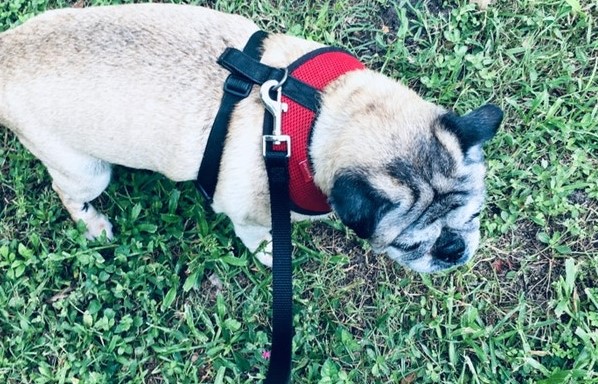 This is my fourteen year old pug, Oscar. As you can plainly see, he's a grade A jerk. A real butthole of a dog. Twenty eight pounds of no good idiot.

In the above photo Oscar is "walking". That means he's standing perfectly still while I also stand perfectly still, telepathically urging him to move oh god please move just pick a direction and walk for the love of god.

His reaction is to squint and continue thinking about whatever it is he thinks about. Probably my death. Eventually he does take a few steps, only to stop and begin thinking again.

Oscar doesn't take his time because he's old or unable to move. He does it because he is a complete bastard, and he has been doing this his entire life.

Sometimes he does move quickly. Specifically, when he spots a droplet of urine left by another dumbass animal. At this point Oscar darts forward and hunches over the pee like some sort of pervert while licking greedily. When he lifts his head afterwards he does a little nibbling/tasting thing that is a perfect impression of Hannibal Lechter recalling the time he ate a human liver with fava beans and a nice Chianti.

After this horror show, Oscar coughs as if he's being choked to death. Which turns a lot of heads my way. With a lot of disapproving looks, from people who assume I am choking my dog to death. When in reality the only one dying is me.

That photo is my point of view for around ten or twenty minutes per walk, four times per day.

Our walks are so slow that other dogs pass us as they head out, then often pass us again as they come back. Sometimes a dog approaches to say hello to Oscar or simply to get a closer look and figure out what the heck he is. My dog always ignores these other, more mobile, dogs and stays still while continuing to stare into the middle distance. Then, about twenty seconds afterwards, he realizes what just happened. At this point he becomes indignant and kicks the dirt in a display of "Don't mess with me!" attitude that ends with him backing up and falling on his butt.

My dog sleeps all night. He sleeps all morning. When I cook he lays down right in the middle of the kitchen (directly in my way) and snores even though he appears to be awake.

Sometimes Oscar rubs his face against my leg like a cat. It seems like an act of affection, until it becomes obvious that he's wiping his mouth against my pants.

It's not all bad, though.

He also has a remarkably round head. I've always admired that. So that's two positive things I associate with this little shithead.

What's the point of this update? Much like my dog, there isn't one.