Graham Barker's Navel Fluff Page, submitted by Vaudun. I find it simply fucking amazing that on an almost daily basis, just when I thought I've become jaded beyond approach, something new and unique on the Internet touches me inside. Usually it touches some sort of special gland that makes me want to lash out and destroy whatever it is, and today it is Graham Barker's Navel Fluff Page.

Graham Barker is a fucking psycho shithead who has spent the last 17 years collecting the lint from his bellybutton and keeping it in a jar. He even has 3D pictures of samples of his lint. 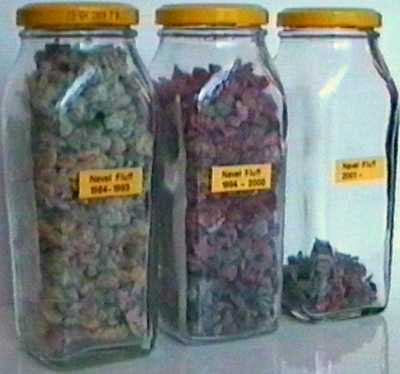 My belly button, however, casts doubt on accepted theories. If navel fluff originates from clothing, then the colour of the fluff should relate to the colour of clothing worn that day. The fluff I collect is always the same colour - a particular shade of red which alters to a yellow-blue after many years. I almost never wear red clothing, so where does the red fluff come from? Regardless of what colours I wear, the fluff stays red.

Collecting belly button lint is disturbing and depressing enough for me, but what I find truly horrifying is the fact that most of the goddamn lint looks BLOODY. Personally I am not averse to my own bellybutton, but I have rarely if ever found more than a single stray hair inside it, where the fuck is this son of a bitch getting jars full of bloody lint? MAYBE BECAUSE HE DIGS AROUND IN HIS BELLYBUTTON EVERY DAY OF HIS LIFE SCOOPING OUT HANDFULS OF RAW SKIN AND BLOOD-MATTED HAIR! Why do I get the feeling this guy's fucking gut looks like the scary end of the Goatse.cx guy.