Look, I don't care how many blogs you post, Petunia. You're still morbidly obese and no guy is going to want to fuck you without first commissioning an expedition of tiny gnomes to explore your nether regions and determine which, if any, skin fold actually leads to the promised land of drunken regrets and I hate to break it to you, but hiring a vastly more appealing hooker is cheaper than that. Also, I am at least partially sure that this isn't you in the video at all, and you're just providing the voice for a humorously over-engorged tick. 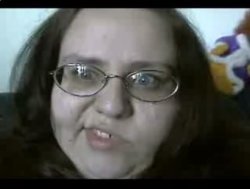 I am honestly too disgusted by these videos to screenshot them, so here's one from the other fat girl video. Hey Moe! Nyuk Nyuk Nyuk!I am honestly at a loss of words for what about you I hate the most. Oh sure, I hate you for weighing 800 lbs., that's a given. I hate that you think posting videos of yourself whining about being fat on Youtube at 35 is the adult thing to do about it. I also hate the fact that you're okay with that, which of course means I doubly hate the fact that you demand that everyone else be okay with it lest you call them nazis; because as we all know hating someone for being so incredibly apathetic about life as to let themselves balloon to a quarter ton is roughly on the same level as gassing the jews.

No, I think I have it. I hate the fact that you're naked. Yes, that's definitely it. I think I could honestly deal with the rest of your bullshit. Not, like, pass a "does this not enrage you" lie detector test about it, but at least choke down my vomit long enough to make it to the toilet. But I absolutely can't tolerate you being naked. I'm sorry. I just can't. Perhaps we, as a people, just aren't capable of that degree of tolerance on some genetic level, but I'm going to go out on a limb here (something you should avoid doing at all costs, I might add) and say that unless someone has a fat fetish, no one else is okay with it either.

Also, I hate to burst either your bubble or your hideously distended abdomen, but "being a sex object", which is to say being sexually attractive, is pretty much required in at least some aspect if you're not down with "humans dying out". Of course, that would mean more Ho-Hos for you, so never mind that.

P.S. Can you please tell me where you fatties buy glasses that manage to wrap around your enormous skulls? Also, has any guy ever gotten so drunk around you that he actually tried to go down on you and then unceremoniously threw up in your pussy but he was too drunk to suction the sick out of your vile crevice and you didn't want him to anyway since some guy's vomit in your vagina is the closest you've had to having a man inside you for nearly a decade so you just left it in and eventually it dried and somehow actually managed to make your 'tang smell better? Thanks in advance!

"i don't understand why you would post this on youtube. what do you want from us? to say nice things to make you feel good? i'm sorry, but i don't have a reaction.. after reading most of these comments, i'm pissed off. this is too surreal for me. the﻿ internet is way too weird for people. "
-blisteredeye

" my first thought when i saw this was "please...god...no"
but now that i saw the whole thing, i have the urge to lube your big body up with crisco and fuck you in the bellybutton, casue ill bet its atleast 7 inches deep, so id have an inch hanging out and my balls could tickle your belly while i go to town on your navel...hows that sound? betcha never got it like that...call me :)>"
-Kimbo420

"I am not going to give you a diet program advice. Consume less calories than you burn, and exercise. Get on a bicycle. Your body will care, and you will feel better. I am a former fat ass myself. It is important what your body looks like. Obesity causes major health problems."
-shanelees