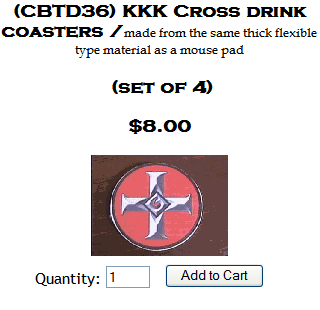 My dad was coach of my little-league baseball team and got ejected from a game after calling the opposing team's Hispanic pitcher "Taco".

After I married a black woman my parents didn't speak to me for nearly 2 years. They had a million reasons why and none of them made sense. It finally dawned on me that my parents were misdirecting their own racism (which I remember well as a teenager) so as to avoid the ugly truth they are racist. I remember the first black girl I dated that they met; before hand my mother called asking if there were topics she shouldn't talk about. I was totally confused, and when my brain clicked I replied, "well I wouldn't go shouting 'nigger!' I think that might be considered impolite." I mean really what topic was she planning to bring up that could be a huge issue?

My son was 8 months old when they finally laid eyes on him. I only live 20 miles away. I told them outright I don't give a shit if they ever speak to me again but they better step up and be grandparents since we don't have a lot of family around.

My wife is convinced they are relieved when we leave so the neighbors don't see a black woman at their house. I wish I could argue otherwise. She thinks I should confront them but I cant see any real benefit of opening that fight up with a couple of people in their 70s.

When one of my aunts (she lives in South Carolina) was young someone told her that black people can't swim.

A few years ago, she saw some black children on one of those floating docks in the middle of a lake and started screaming that we need to save them and how the hell did they get out there.

She was in her forties.

I used to live in Calais, Maine, which is not too far from another city, Eastport. To get to Eastport you drive through a Native American reservation, which is pretty poor, like most reservations, because of our country's depraved and racist policies regarding indigenous peoples. So, to boost revenue, the police on the reservation are very strict about the speed limit and enforce it extremely precisely. This works out great for everybody, because all the locals know not to speed, the only people who really get pulled over are tourists.

So I'm working at a radio shack and this woman comes in and asks how to get to Eastport. I give her directions and tell her not to speed through the reservation, because they'll pull her over. She looks me right in the eye and goes "Oh yeah?! What'll they do then, have a pow-wow?!"

A gem from good old granddad: "Black people are good athletes because they have such big nostrils and can inhale more oxygen".

I was talking to a co-worker a few years ago. She's a black lady around 50 years old, and she started telling me about a white guy from Kentucky she dated for awhile back in the 70's. He asked her out, they started dating, blah blah blah.

A few months went by and he hadn't made any attempt whatsoever to get in her pants. So she finally came out and asked him why he wasn't interested in sex, and his response was "Well, it's just that my mother always told me black people have tails".

Just to note, I actually have family in Kentucky. Thankfully, none of them think that any groups of people are born with tails.

I was handing out programs for a free outdoor production of Othello and had a guy ask me if it was "the nigger play."

When I made embarrassed noises in the affirmative, he promptly scowled and stalked off.

Also, the guy who played Othello in that show said he was almost run off the stage when playing Henry V in a production in Georgia because the audience didn't want a black guy "dirtying" Shakespeare.

My grandmother used to call me "Tony" (not my name) because, apparently, "Aaron" is a "nigger name" (and not a Jewish name).