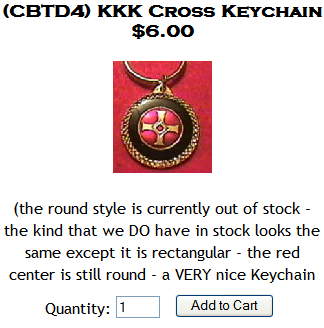 My dad works for a big international van line, so we get lots of big corporate accounts.

The first shipment was picking up a lady in Georgia who was moving to California. The Van Lines sent 2 ladies, who were black, to pack her belongings. She closed the door on them, phoned the Van Lines and demanded white packers. The 2 women got sent home with full pay, and the van lines sent 2 other packers.

The second shipment, my Dad hired 3 guys, 1 white, 2 black, and they were helping to load his truck.

The customer brought out ice tea to my Dad, but told him that the "boys" would have to drink from the water hose out back. My Dad declined, and said we had a cooler on the truck full of drinks.

I work at a business that, among other things, offers wire transfers. One day a woman who's been working in that department for something like 25 years tells me that she doesn't think Hispanics should be able to send money unless they get American names, because the Spanish two-surname system is too hard to enter into the system.

The real kicker is that the only thing you have to do differently is click a second box to enter a second last name.

One time I attempted to wake up my mom to get ready for work and she blurted out in her sleep "KILL THE NIGGERS!". Yeah.

A couple of years ago, I was working retail at a souvenir shop in New Zealand (Christchurch, to be precise), where most souvenir shops there are run by Asians , mostly Chinese and Japanese. I'm from Argentina, but I don't really look "Latin", on account of the whole mixture of cultures and races going on here. So one day I was chatting with one of the girls there, and this Australian guy comes in, looks at me, smiled and goes: "Thank God you're a Kiwi!". The girl I was working with eyes him quite coldly and says "Actually, he's from Argentina. You know, Latin America?". He looks at her, looks at me again and says, still smiling: "well, at least he's not Chinese!".

My grandpa in his late stages of Alzheimer's told me that Hitler had the right idea. This man had fought in WWII. For the Allies.

Every time I visit my grandmother she seems to have become more racist.

She worked in the NHS for 40 years which is an incredibly multicultural organisation, she had people from every continent at her retirement party. My grandfather worked across various countries in the Middle East and she would regularly visit him.

I blame retirement and the Daily Mail.

An ex of mine took a trip down to Virginia, I think it was, to meet some of her childhood friends. When she brought up the fact that she was Jewish, her friends started to examine her head extremely cautiously. When she asked them what they were doing, they replied:

My mom won't eat rice. She says, "I was always against the Vietnam war and I just don't want to support them like that.