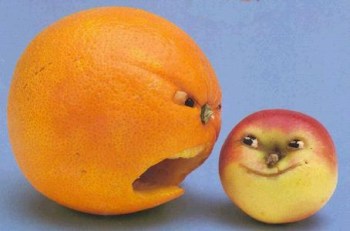 I was making Ramen in college, and I used my roommate's pot since mine was dirty. Pretty soon I noticed some smoke and an odd smell. I melted the bottom of the pot to the stove! It turns out it was a plastic pot made for microwave use only, but some genius out there decided to make it look exactly like a normal stove pot. I got made fun of for awhile about not knowing the difference between plastic and metal, but what the hell, I'm not used to checking pots first to see if they are plastic.

I once microwaved garlic bread (which was frozen) for 8 minutes on high. It was a nicely smoking hockey puck that stunk up the house when I was done.

My sister made macaroni and cheese (KD) one time when she was 14. She didn't drain the water before adding the cheese powder, and basically ended up with a cheesy macaroni soup.

About 3 years ago, I had just started living on my own and had finally begun getting sick of pizza. I was talking to a friend and the subject turned to cooking and he mentioned how he liked to marinade chicken breast in fruit juice to add flavor and keep the chicken moist.

What he meant to say was lemon or lime juice.

Me? I tried strawberry/banana.

The result was pink chicken that tasted like burnt strawberries. The banana clearly wanted nothing to do with the entire thing.

McCormick's switched up their red pepper shaker design for no reason. The lid changed from a screw-off to a flip-up. So I got a new bottle of the stuff and was making a pasta sauce and I unscrewed the red pepper and without looking gave it a couple dashes into the sauce. I tried to get as much as possible out of it but in the end that was about the spiciest penne I've had.

Just before I passed out drunk I had put a personal pan pizza in the oven. It had been cooking for solid 10 hours at 425 degrees F when I woke up the next day.

I'm generally a pretty decent cook, but the first time I ever used a rice cooker, the results were pretty disastrous. Rather than reading the directions like I should have, I just used the same rice/water proportions I use when cooking rice in a regular pot. I ended up with a brand new rice cooker that was filled to the brim with hot, steamy Elmer's glue. I really did not enjoy cleaning that pot.

I made a chicken quesadilla and wasn't really paying attention when I went to grab taco sauce from the refrigerator. I had a container of raspberry vinaigrette in there that was shaped very similar to the taco sauce bottle, and the color was sort of close. I started pouring what I thought was taco sauce on the quesadilla but soon noticed a very sweet aroma wafting up to my nostrils. It turns out raspberry vinaigrette and Mexican dishes don't mix very well. I tried to mop up the dressing and overwhelm the vinaigrette with extra taco sauce. It didn't really work so I had to throw the dish right out.