Don't know where this business is based, but I saw this truck one day a few years ago and had to get a photo of it. 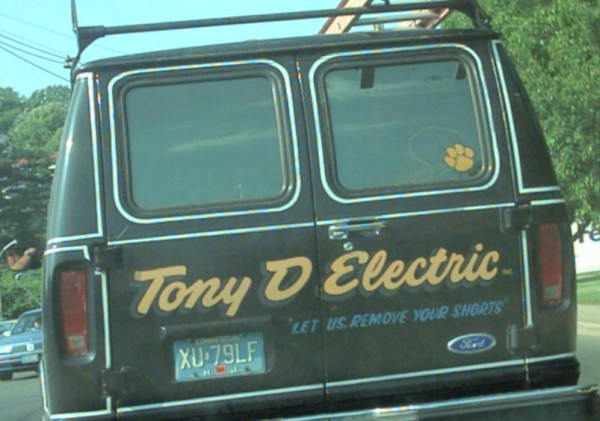 Theres a tech company below my unit that has the slogan: "Getting you from B2B"

It just sounds like you are getting nowhere, really.

I've always been fond of the HITT Contracting construction company, and it kills me that they don't have a suggestive slogan.

Used to have a Kmart in the local mall with a pretty peculiar slogan. This is Presque Isle, Maine, not exactly a mecca of culture and refinement, but you'd think even those beer-soaked tractor jockeys would have figured out there was something wrong with having this slogan painted, in gigantic red letters, by the entrance to the store:

My Grandfather used to have a septic tank cleaning business. On the side of the tank was a cartoon bee pumping out a septic tank along with the slogan 'You dump, we pump'.

There's a mining company I know of called Fuller-Schmidt. Nobody ever forgets their name.

I remember Pepto-Bismol running ads stating that "Children's Pink Does More Than You Think" a while back.
There was also a local gun store (Don's Guns) that was advertising "Back to School Specials- 20% off" a few years ago.