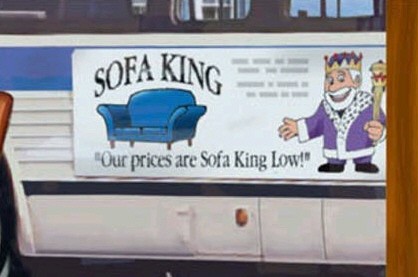 In my hometown there was a tiny barber shop in a strip mall with a small sign outside that read: "Hammonds Barber Shop- We Need Your Head".

There's a car valet place on the way into Manchester whose slogan is 'The Best Hand Job In The North-West'. I'm sure it's deliberate, and it makes me smile.

At my old high school, the men's wrestling team's slogan was "Get hard or go home".

The telephone company I work for is currently using the slogan "Let us turn you on!" Some of the calls we've been getting are really weird. Stupid marketing department.

Only the fucking cell phone industry could get away with this. Their slogan isn't "Look how great we are!", but rather "We suck, just not quite as bad as the other guys!".

I work at a GM dealership, and to make money the boss put up a big billboard on the edge of the car lot right next to a main highway. He sells both sides of the billboard, but last fall he put up one of his own. I wish I had a picture of it.

There was a guy in an overcoat with his back to the camera. He had bare legs and had the overcoat pulled wide open. He was facing a middle-aged lady, who sported a surprised look on her face.

The slogan on the board was "Expose Yourself...to our great service department".

Within an hour the receptionist started getting complaints. The boss wouldn't budge, he just laughed it off. Eventually some city councillors started phoning him too, asking him to take it down. I'm told he buckled when the mayor called him, but he took his time having it taken down. It was up a total of maybe 3 weeks.

And this must be fairly common because I've seen it in other cities, but there is a plumbing company here in town and their slogan for about the last 30 years is "where a flush beats a full house".

Every once in a while, I see a van driving around advertising a tattoo/piercing shop in my town.

Its slogan: "Come feel our pricks".

I don't think I've ever seen so much filth! It's clear to see that these businesses have a lot to answer for. I can prevent my son from playing video games which will corrupt his harmless, innocent mind, but there's no way little Aeris can avoid being exposed to the onslaught of crude, tasteless immorality of branding products. Thanks again to the forum goons for exposing this sinful behavior and bringing us closer to the love of Jesus. In next week's Comedy Goldmine I will be taking a bath in the condiment of YOUR choosing! Will it be ketchup? Does mayonnaise take your fancy? Perhaps you're a mustard fan? Use your keypad to vote and check out next Tuesday's Goldmine for the results!